Witches of East End Recap – Bizarre Ending: Season 2 Episode 10 “The Fall of the House of Beauchamp” 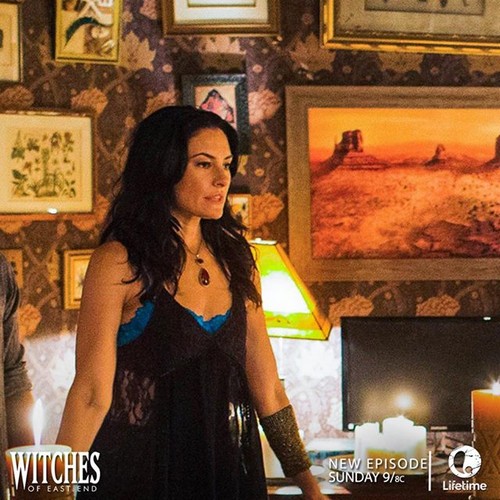 Tonight on Lifetime Witches of East End returns with an all new Sunday September 21, Season 2 episode 10 called, “The Fall of the House of Beauchamp.” On tonight’s episode Joanna takes drastic measures after being devastated by Tarkoff’s actions; Dash’s secrets begin to spill out; Wendy and Joanna reconnect with their father.

On last week’s episode Tarkoff took revenge against Frederick; Freya confronted Killian; Ingrid gave Dash an ultimatum; Wendy and Tommy’s relationship proved dangerous; Joanna took action to protect her family. Did you watch last week’s episode? If you missed it and you want to catch up before tonight’s episode you can read our full and detailed recap right here.

On tonight’s episode Joanna is devastated by Tarkoff’s actions and tries to take drastic measures. Dash’s secrets start to come out. Wendy and Joanna reconnect with their father.

The Gardiner Brother each survived their epic magical dual with each other. However Dash was the one left worst for wear afterwards. A certain talisman of his had escaped its bonds during the fight and so what he really needed was Ingrid’s help to fix it. But she hadn’t answered her phone when he called. And Killian was the first to figure out why the Beauchamp sisters couldn’t be at there and beck and call.

On the last episode both Ingrid and her sister Freya were murdered by Tarkoff. Now, the Beauchamp family is slowly coming apart at the seams. Fredrick was told to leave the house after his mother and aunt found his sisters. The older women didn’t even want to look at him. They blamed him for everything and that was that. And so the only place he could of going to was the bar.

Originally, he went there to drown his sorrows and yet when he ended up running into Killian – he decided to use the other man as a punching bag. Fredrick and Killian have a history. Earlier on Asgard, it was supposedly Killian that lead Fredrick down a dark path. You know the one that lead to betraying his loving family and siding with his evil grandfather the king. So Fredrick wanted/needed to blame his sisters’ death on someone besides himself and chose Killian as the perfect target.

Although Killian can’t technically be held accountable for what he did in a former life – Fredrick wished to make it so. Yet their fight was quickly over after some bystanders thankfully pulled them apart.

Later, Killian went to go see Freya. He wanted to know what was going on that made Fredrick snap the way he did. And thought Freya might have the answer. Yet the second he saw Freya’s lifeless body – he realized why Fredrick was acting like that because he also broke down.

[10:08:00 PM] Kristine Francis: Killian had loved Freya and so when his brother came by his house asking for help Killian then tried to push him away. He couldn’t understand why Dash was acting so callously about two people they had both come to care for. But Dash hadn’t known what was going and it was left up to Killian to fill him in.

Dash was distraught about Ingrid – he didn’t even second guess the mysterious woman that propositioned him at the bar. He just slept with her (in a public place mind you) to get rid of the pain. And then he flirted with her because by that point – it was Ingrid who?

Dash has always been resilient! But the woman he hooked up with was a federal agent. She came to their sleepy town to investigate all the strange deaths that’s been happening!

Wendy though came up with a plan to get her nieces back. Because she actually cares about her family –she pulled Fredrick out of the bar and told him that they had to finish the ritual to get the king back. Her father is the only one strong enough to bring back the girls without consequences and despite her own past with her father – she figured the king would be so grateful about returning that he would be willing to do this one little thing for his granddaughters.

And she needed him to do this for her. Joanna was busy trying to kill herself, the girls were dead, and Fredrick was a drunken slop. Their family was broken and the king was the only one with the power to fix it.

So she and Fredrick went to Tarkoff (it seems he can’t be killed – merely waylaid). And they continue the ritual on poor Tommy. Wendy had cared about as well but it looks like not as much as she did about her family.

They brought back the king and surprisingly the king’s first official action was to publicly browbeat Tarkoff. Allegedly, His stooge was never given the order or the permission to kill the girls and so the king showed his displeasure. And that was odd for the king. He’s infamously known as being cruel and vindictive person yet the man that came back to this world suddenly wanted to play happy families.

The king was also upset that Fredrick was tortured. Though he quickly forgot that he used to personally torture Fredrick. That was just one of the many things the kind tried to white-wash. And Joanna wasn’t going to let him continue to do that with her family.

After her father brought her girls back, she talked them into fleeing with her. Joanna was going to use time travel to place her loved ones outside of his control. But at the last minute Ingrid chose to stay behind with Fredrick and the king.

All she’s known about him thus far was what her parents and aunt told her. So Ingrid stayed to learn about this mysterious man herself which also meant the other women went back in time and she didn’t. The ladies are somewhere in the colonial times and Ingrid is with the king and defenseless.

Who’s safer? The ones that can be burned at the stake or Ingrid who’s with the king?