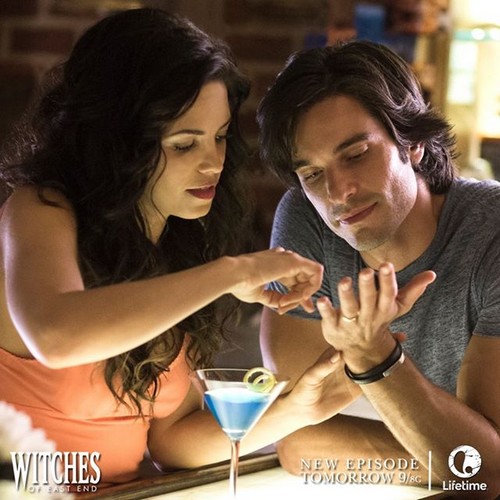 On the last episode Tarkoff, an old friend of the family, visited Joanna and Freddie. Meanwhile, Wendy, Freya, Ingrid and Dash attended an art gala where Wendy encountered someone from her past; and Killian began to doubt his feelings for Eva. Did you watch the last season’s finale? If you missed it we have a full and detailed recap, right here for you.

On tonight’s episode Freya and Frederick celebrate a milestone birthday; Tarkoff puts pressure on Frederick to get things done; Ingrid and Dash grow closer; Tommy gets a surprise from Wendy; Joanna faces one of her worst fears.

RECAP: Eva is losing her grip on Killian. He’s been growing more immune to her potions everyday (thanks to the love he has for Freya) and so she’s starting to run out of time. The plan she has with her grandmother involves her getting pregnant and so far that hasn’t happened yet. And Killian continues to be around Freya.

Freya is celebrating her first 30th birthday in centuries. Hence her mom wants to make a big deal out of it and officially celebrate it.

So Fredrick found himself roped into celebrating a big party as well (he is Freya’s twin after all) and Ingrid like always is in the background helping out. And perhaps that was wrong of the family. They keep on relying on good ole dependent Ingrid and that’s led to her wanting to live independently from them at sometimes a great cost to herself. Lately, she has even begun to seriously consider dating Dash and Dash isn’t good for anyone.

He’s dabbling in dark magic and has taken to killing his enemies way too freely. Fredrick at least was almost hesitant about stabbing Tarkoff in the heart and that was practically a necessity. He had only turned to such a drastic actions after he realized Tarkoff was willing to kill on practically a daily basis in order to release the King.

And while Fredrick doesn’t know what he wants in terms of his grandfather – he knows he doesn’t want to lose the life he has now. He has his family and this new girlfriend. So he wants to be careful about his next move and not risk losing any of them.

However killing Tarkoff wasn’t as simple as Fredrick thought it was. The other wizard is actually really powerful and he’s warned Fredrick away from a second attempt.

Tarkoff’s presence was just one of the many things that ruined the birthday party. And it didn’t help that the birthday boy and girl had run off before the cake could be cut. Fredrick had needed to put some distance between himself and Tarkoff. And Freya, depending on how look at it, managed to finally catch a lucky break with Killian.

Fredrick had warned Killian off and instead of listening to why Fredrick hates him (something to do with Asgard) that appears to have pushed the other man into asking Freya to be with him. He’s been feeling himself drawn to her recently yet Fredrick kind of got the gears in motion. So when Killian went to Freya proclaiming his love – he couldn’t understand why she pulled away. Especially as he slowly picked up the ability to read peoples’ minds and knows for a fact Freya is just as much in love with him as he is with her.

But she couldn’t stay away from him and so she told him why it’s never been a good idea for them to get involved – they’re star-crossed. As in they’ll never get that chance to be together and live long happy lives. Freya will always die an early death afterwards.

Though they ended up ignoring their disastrous past history and went on to make plans to run away with each other. It was going to be their chance at a fresh start. Away from his wife and away from her life that’s seemingly been in a rut since her broken engagement.

Then their plans on a beautiful life together went belly up all because he had foolishly returned to his marital home to pick up a few things. When he saw Freya after Eva – he no longer wanted to run away anymore. He told Freya that he loved his wife and that what happened tonight (sleeping together) was never to be repeated.

And speaking of the morning after, Ingrid had snuck away from the party and unfortunately she did so in Dash’s arms. The two of them had gotten together in a heated frenzy that night and by morning Ingrid completely regretted what she did. She’s since learned how many lies Dash has been telling her.

Ingrid had wanted to call her sister to assure her she was alright (and apologize for bailing) and her phone was dead. So she was going to use Dash’s computer to send out an email and sadly Dash didn’t close an incriminating browser. Hence Ingrid got see for herself that Dash was being blackmailed.
And, well, it didn’t take long to figure out who was behind it!
She was so disgusted with him that’s he said that they were over. Not that they should have started anything to begin with. So Ingrid and Freya both got their hearts broken. And now they can join Wendy. She had revealed her magic to Tommy and though she doesn’t want to strip his memory – she’s going to have to find a way to protect him one or another.

But no one could have foreseen that Fredrick would break his heart when he decided at the last minute to use his girlfriend’s body as host for his grandfather. Maybe it was because he feared Tarkoff and maybe this was plan all along when he suddenly began dating someone. Whatever the case may be this episode ended with Fredrick in the middle of a ritual – so is the king truly back?!?!