Young and the Restless Spoilers: Will Victoria Newman Have Revenge Sex With Stitch?

BY Siyana Riley on March 12, 2014 | Comments: one comment
Related : Soap Opera, Spoiler, Television, The Young and the Restless 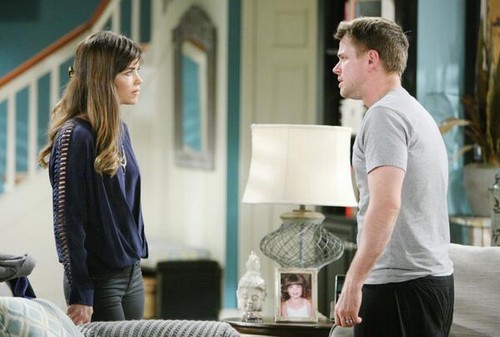 Infidelity is nothing new on the Young and the Restless, but Victoria Newman’s affair with Ben ‘Stitch’ Rayburn is about to bring the house down.

As we know, Billy Abbot has just lost his daughter, Delia, and has been going to a support group for people recovering from loss. He meets a woman named Kelly who has also just lost her son, so she and Billy end up connecting on a very personal level. Although Billy is married, he ends up sleeping with Kelly and developing feelings for her. Billy’s wife, Victoria Newman, ends up finding out what happened and gets very upset [understandably].

This isn’t the first time Billy’s betrayed Victoria’s trust, and so she ends up losing her temper and leaving the house. She ends up in the gym with Stitch, and ends up kissing him in a moment of passion. However, she feels guilty for the kiss and tells Billy about it when she gets back home. She also decides to give Billy another chance after talking to Jack about her relationship, and she and Billy have a heart-to-heart about their future. She makes Billy promise that he’ll never see Kelly again, which he agrees to.

But alas, if everyone kept their promises, the show wouldn’t make for compelling television, would it? The next day, while Victoria is in the gym, Billy gets a call from Kelly asking to speak to him one last time. Without telling Victoria, Billy goes to see Kelly and they comfort each other for the last time, agreeing to not see each other again. However, Victoria manages to get a glimpse of his phone when he’s back home and otherwise preoccupied, and what should she see but a message from Kelly. The message clearly shows Kelly thanking Billy for meeting her and giving her hope. Basically, Victoria gets furious at Billy for breaking his promise to her, and she ends up screaming at him, calling him a liar and all manner of horrible things. Billy makes things even worse by admitting that he has feelings for Kelly, which is the last straw for Victoria, who proceeds to throw him out of the house.

Later, Stitch overhears Billy telling Dylan that Victoria kicked him out of the house, and he can barely contain his glee. Stitch immediately heads to Victoria’s house to ‘comfort her’, and the last thing we see is them hugging. Basically, the ending suggests that Victoria will have sex with Stitch for revenge, even though she’s still in love with Billy.

What do you guys think? Will she go through with it, or will her conscience get the best of her? Keep in mind, she believes that Billy and Kelly hooked up even after he promised her that he wouldn’t see Kelly again, and she doesn’t really know the truth about what happened.