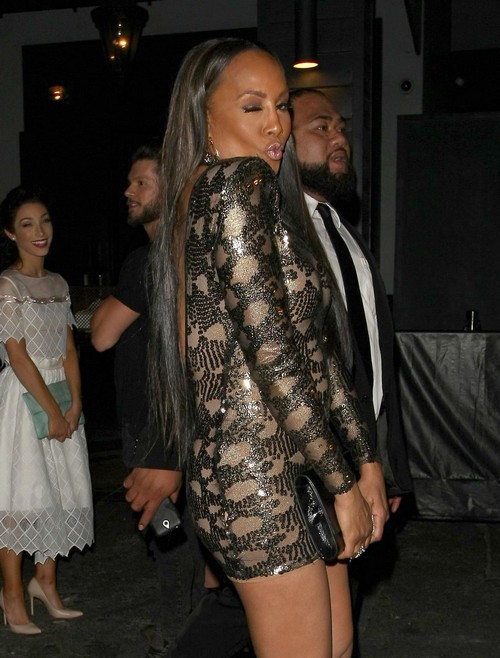 50 Cent and Soulja Boy have struck back at Vivica A. Fox after the “Kill Bill” actress suggested to Andy Cohen that they might be gay. It all went down on a recent episode of Andy Cohen’s Bravo hit “Watch What Happens Live. Vivica has since apologized for involving Soulja Boy in her feud but has made it clear that she is not apologizing to 50 Cent.

When talking about 50 Cent and his comments about “Empire” with Cohen, Vivica very slyly made her own gay joke, insinuating that her rapper ex-boyfriend should know. Fox told Andy in regard to 50 Cent’s comments, “First of all, you know, um, pot calling kettle black is all I’m saying.” Of course Andy asked Vivica what she was insinuating. Then she said, “Well, I mean, no, he’s not. I mean, we had a good time, I mean, but he’s just, seems, like he’s got something that’s not quite clear.”

That’s where Soulja Boy got dragged into the mess. Vivica A. Fox brought up the XXL magazine cover where 50 Cent posed next to a shirtless Soulja Boy. She told Cohen that “He looked like a booty snatcher on that one to me.”

Apparently Soulja Boy really didn’t like the suggestion that he and 50 Cent may have had something going on. The “Crank Dat” rapper jumped on Instagram and posted a rather unflattering picture of Vivica A. Fox with the caption, “Everybody hit up this cougar..she’s single & ready to mingle …1-800-GrannyDesperateForAttention extension I’mWashedUp.”

Vivica A. Fox has already apologized to Soulja Boy for what she said to Andy Cohen. Fox made it clear that she was only taking shots at her ex 50 Cent and she is not sorry for what she said about him. Soulja Boy reportedly accepted the apology and is bowing out of the ridiculous but highly entertaining feud.

Despite a raging feud with Rick Ross in the works, 50 Cent is not bowing out of the new internet brawl with Vivica and has been posted every few hours on Instagram, making fun of his famous ex. The “P.I.M.P.” rapper started out by reposting Soulja Boy’s jab at Fox.

Then 50 Cent followed up with a meme of Kevin Hart that said, “Waiting on 50 cent to respond to Vivica Fox like” and a caption that said, “an somebody should have told her I’m a Troll. I got my asshole merit badge on now. #FRIGO #SMSAUDIO.”

50 Cent wasn’t done with Vivica A. Fox just yet. To be honest, he’ll probably drag this feud out for a while. The next photo that 50 posted to Instagram was a photo of Vivica A. Fox with a big dent in her breast. Across the picture it said, “Really bad boob job!” Vivica’s ex-boyfriend said in that caption that Vivica once told him that she could have played all of the roles that Halle Berry did but better. Is that a whole new feud in the works? We’ll be watching!

Anyway, 50 Cent then went on to post a pretty awful looking tabloid shot of Vivica A. Fox with the caption, “No comment necessary.” The next photo shockingly didn’t have Vivica in it but it was about her. The meme of two boys talking about a girl wearing a diaper insinuating that Vivica might need one because she is full of…well, you know.

There are even more jokes aimed at Fox on 50 Cent’s Instagram so those who want to look know how to find it. Who has time for all that Instagram feuding though? If we were to recap all the digs 50 Cent has taken at his famous ex, we may have to file for bankruptcy too.

Maybe he should put that much effort into making some money so he can pay back Rick Ross’ ex for that lawsuit he lost. Or he could even try a little harder to hide the money he does have instead of building mansions on other continents.

Vivica A. Fox by FameFlynet