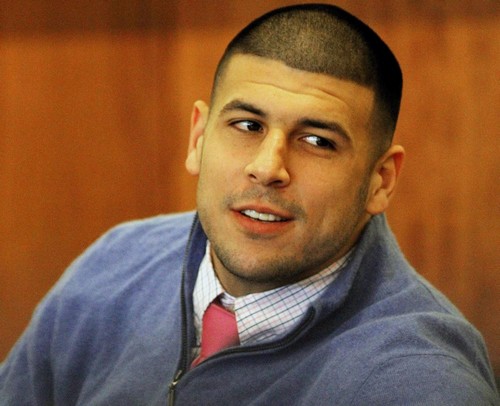 The verdict is out, and Aaron Hernandez has just been found guilty of first-degree murder in the case of semi-pro football player Odin Lloyd. Aaron’s conviction means he now faces a life in prison – WITHOUT parole.

The minute the verdict was read out in court, both Aaron’s mother and fiance started bawling their eyes out, and you can’t really blame them. It was reported a while back that Aaron might get off on a technicality, since his lawyers started arguing that he was just a witness to the crime, not the perpetrator of the crime itself. However, it looks like the judge and jury found the evidence against Aaron too damning, since this is the worst-case scenario for Aaron’s team.

Aaron was seen mouthing the words ‘stay strong’ to his fiance after the verdict was read out, since his family was understandably upset. However, 25-year-old Aaron Hernandez – according to the judge and jury – did supposedly murder Odin Lloyd by shooting him six times. Plus, Aaron was found guilty of ‘illegal gun possession and illegal ammunition possession’, and it all amounts to too much evidence against him.

Now, Aaron could actually end up with something worse than life in prison without parole, especially if he’s convicted in this next case. Yes, for those who don’t know, Aaron Hernandez is also set to stand trial for a case involving two people being shot in Boston in 2012. Man, that NFL – it really turns out some gems of human beings, doesn’t it?

What do you guys think about Aaron Hernandez being charged with a guilty verdict for first degree murder? Do you think he did murder Odin Lloyd? Or was he actually a witness, and is being unfairly framed for a murder that he didn’t commit? Let us know your thoughts in the comments below.