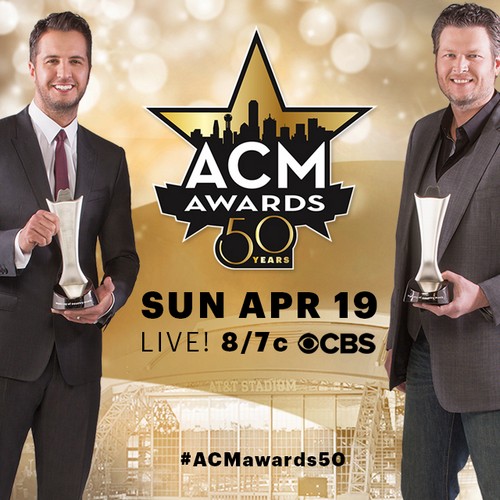 The Academy of Country Music Awards 2015 are rapidly approaching. The show will air tonight, Sunday, April 19 and CDL will provide fans with an updated ACM winners list as the show progresses. The 50th Annual ACM’s will be held at the AT&T Stadium in Arlington, Texas, and will honor the the top Country artists of the year.

With only 11 categories, the awards are that much more valuable. Fans are currently voting for the biggest award category, Entertainer of the Year, which is comprised of nominees Jason Aldean, Garth Brooks, Luke Bryan, Miranda Lambert, and Florida Georgia Line.

In addition to Entertainer of the Year, fans are also able to vote for New Artist of the Year, until the show starts at 8.pm. Eastern. The nominees for this category are Sam Hunt, Thomas Rett, and Cole Swindell. We also know that there will be Milestone Awards given out to honor the likes of Garth Brooks, Miranda Lambert, Kenny Chesney, Reba McEntire, George Strait, Taylor Swift, and Brooks & Dunn. Taylor Swift is still considered country?

The show will be hosted by country music heavy hitters, Luke Bryan and Blake Shelton, who are also facing off for Male Vocalist of the Year. Check out five of the biggest categories and nominees below, and let us know who you think will win each respective category. We will update the list after the show, and see just how accurate you are at picking winners.

Tune in to CBS to catch the 50th Annual Academy of Country Music Awards tonight, Sunday, April 19 at 8 p.m. EDT, and see if your predictions came true. Once the results are in come back to CDL for all the detailed results.