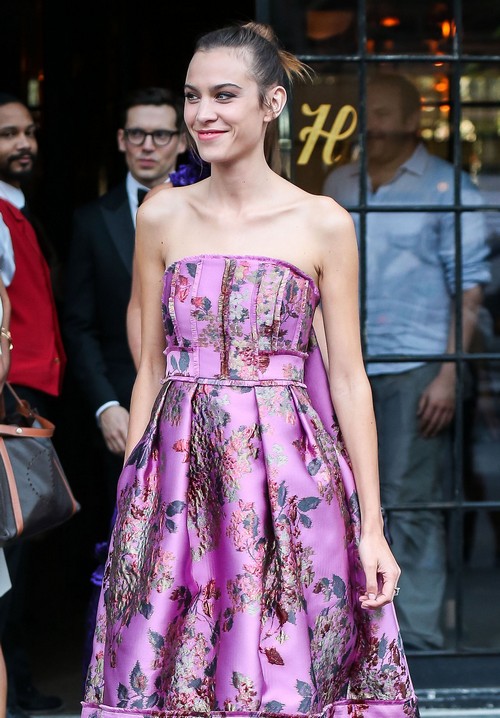 We didn’t see this one coming! Actor Alexander Skarsgard, best known as Eric on HBO’s hit series True Blood, is officially off the market. Skarsgard, 38, is reportedly dating British model and TV personality Alexa Chung, and despite their busy schedules, the two are having a lot of fun according to sources.

Various sources tell Us Weekly, “It is serious and has really heated up. It’s a fun relationship for both of them. She’s just about as busy as he is and it’s not really feasible [for them] to become a more committed couple, but the hang outs are great.”

Alexander Skarsgard and Alexa Chung were most recently spotted out and about on a romantic date in Brooklyn, New York on Friday, May 29. The two were seen getting cozy and holding hands in plain sight at New York’s Prospect Park and Botanical Gardens. They even took photos of one another and Alexa, 31, shared one of the photos of herself, taken by Alex, on her Instagram. She captioned it, “O rose, thou art sick!”

These two have not been in a relationship for quite some time, so right now, they are going through the beginning stages of a relationship, and are probably having a lot of fun enjoying each other’s company as much as possible. We wonder how long that will last.

In the mean time, we are sure that Alexander Skarsgard and Alexa Chung will be seen out in public quite a bit, especially since they will want to take advantage of all the free time they have. Once their schedules pick up, it may be a little bit more difficult for them to main a relationship. Only time will tell.

What do you think? Is this a summer fling, or are Skardgard and Chung going to last? Let us know in the comments below.