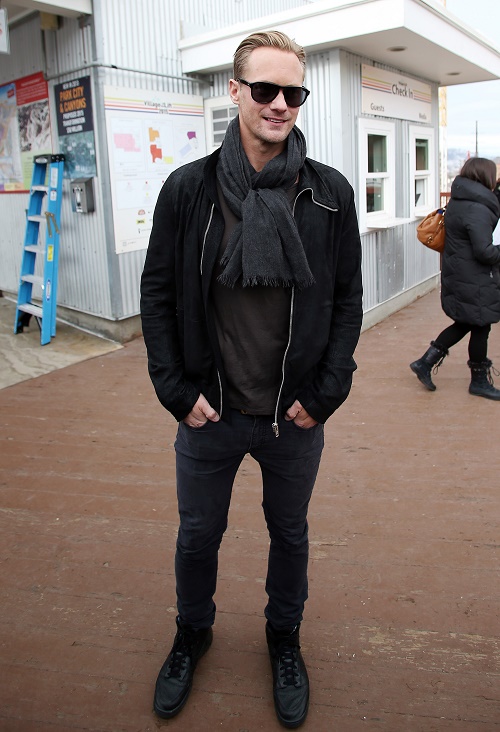 Alexander Skarsgard and Margot Robbie are rumored to be dating after they were seen making out at Sundance! Margot Robbie was supposedly in a serious relationship with a non-celebrity for a long time, but as we know, it’s very rare that civilian/celebrity relationships sustain themselves. After Margot hit it big with The Wolf Of Wall Street, she immediately became the talk of the town – and that probably led to some PR-arranged hookups with other actors. Although there were rumors that Margot had hooked up with Will Smith on the set of Focus, the latest reports have linked her to Alexander Skarsgard, her co-star in Tarzan.

Let’s be real, any female co-star of Alexander Skarsgard always, always gets linked with him. It’s the Skarsgard curse/gift, isn’t it? But this time, E! has actually confirmed the rumors, claiming that Margot Robbie and Alexander Skarsgard were indeed spotted kissing and making out at the Sundance Film Festival.

The pair definitely partied together in Park City, Utah, but the veracity of the kissing reports is already being questioned. Some sources are saying that the two were just close, others are saying that they were flirty, and still others are suggesting that Alexander and Margot were full-on making out in front of other guests throughout the night.

If the two are dating, it could just be a PR stunt for Tarzan – especially since Alexander Skarsgard is supposedly ‘dating’ any woman he ever works with. However, these are two definitely attractive, single actors, so why not? It’s better for that to happen than Margot to get linked to married or attached men, especially since that’s already happened with Leonardo DiCaprio and Will Smith. Plus, she’s reportedly single, so I’m sure this isn’t the only person that she’ll be linked to for the next few months. The girl’s been extremely busy filming several different movies, so to all her male co-stars, here’s a PSA.

What do you guys think? Are Margot Robbie and Alexander Skarsgard dating? Let us know your thoughts in the comments below.