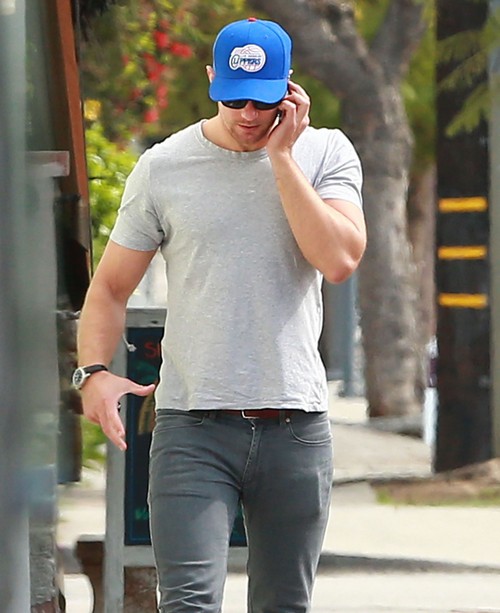 It’s surprising that it’s taken this long for the tabloids to link Katie Homes and Alexander Skarsgard, especially since they’re both single and worked together on The Giver months ago.

But of course, their ‘romance’ was inevitable considering their co-star status on The Giver and their constant presence in the tabloids. A report from Grazia claims that it was on the set of the futuristic sci-fi movie that their love ‘blossomed’, explaining, “Their flirtation was one of the worst kept secrets on set. Nobody is surprised that they’ve been spending time together. They really enjoy each other’s company.”

Apparently, their relationship is currently very casual, but they are planning to spend more time together when they promote the film. Oh, you mean when they ARE FORCED to spend time with each other? If they really were ‘dating’, why wouldn’t they take time out of their schedules to see each other? Away from a movie set or promotion, I mean. Even if the relationship is casual, that’s the least they can do, right?

Plus, wasn’t Kate supposed to be dating Jamie Foxx just months ago? Since those stories originated from legitimate outlets, I’m more inclined to buy that Katie is dating Jamie than Katie is dating Alexander. Obviously, I have no doubt that Katie and Alexander did ‘flirt’ on the set of The Giver, but if were to link every pair of co-stars for flirting with each other, we would have a relationship start from every damn movie that was ever made.

There’s no denying that Katie and Alexander would make an attractive couple, but Katie just doesn’t strike me as the type of girl to juggle between two guys. So if she still is dating Jamie, then I don’t think she would have allowed herself to hook up with the Skarsgard – despite his charm and good looks.