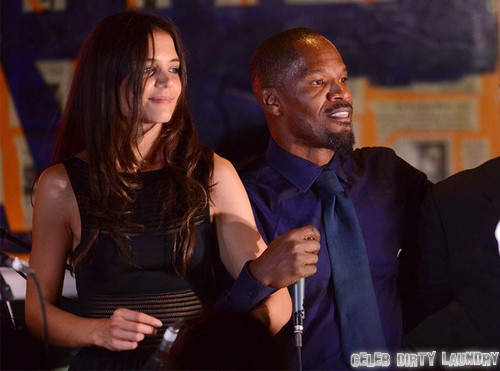 According to a new report from OK! Magazine, Katie Holmes and Jamie Foxx are getting serious enough in their relationship that everyone is encouraging them to go public. Ah, but they’re still scared of Tom Cruise, aren’t they? I think that’s probably the biggest obstacle to them ‘going public’, as they say.

OK!’s source explains, “Everyone wants them to just come out! It’s becoming the worst-kept secret in Hollywood.” Katie still denies dating Jamie, and he’s just refusing to comment on the whole affair. Despite this, there’s been eyewitnesses sightings of the two of them together, and many legitimate reports claim that they were spotted together on Super Bowl weekend. Either they’re very, very close, or they are dating and they really, really don’t want Tommy boy to know.

See, Jamie and Tom used to be really good friends. I say ‘used to be’ because I doubt Tom’s very happy with Jamie these days. Sure, the same rules don’t apply to Hollywood because it’s a large promiscuous playground, but anybody hooking up with your ex-wife has gotta land on your no bueno list, right? And despite all the bad publicity, Tom’s still one of the most powerful players in Hollywood, with a lot of industry connections plus the crazy connections from Scientology. Even if his Hollywood friends don’t do anything, he’s got his Scientology spies to do his bidding. So really, it’s never a bad idea to get on Tom’s bad side, even if he’s become a laughingstock in public.

When will Jamie and Katie go public? Well, if they continue getting serious, then I’m guessing it’s only a matter of time before it happens. They’ll just have to hope that Tom’s come to terms with it by then.