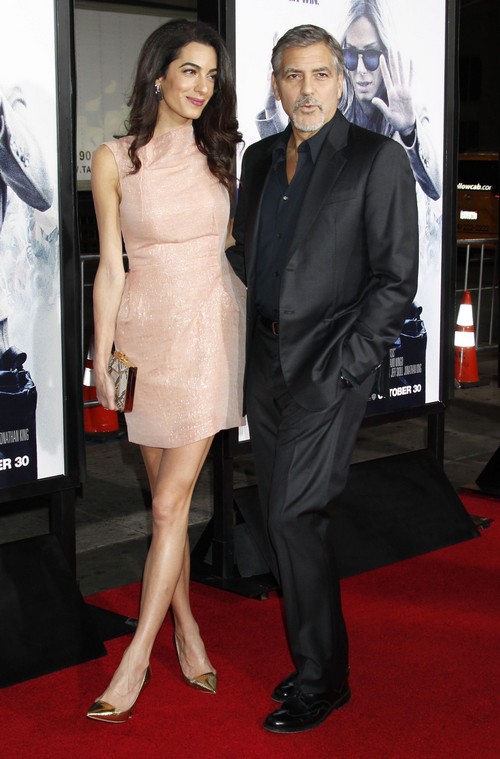 Amal Alamuddin isn’t wearing her huge engagement ring from George Clooney and rumor has it that Amal wants to go lower profile on the huge ring but some think that is just a cover up and there is trouble in her marriage to Clooney.

Alamuddin recently stopped wearing the 7-carat stunner worth around $750k because the human rights lawyer thinks her ring is way too flashy for the type of work she does. So instead of wearing the huge rock while working to defend some of the world’s most heinous dictators and human rights violators, Alamuddin is opting to wear a simpler platinum band.

The idea of making her wedding finger look a little more subtle seems silly since Amal often represents some of the most high profile human rights cases.

Apparently George Clooney isn’t upset that Amal wants to swap out the huge diamond ring that Clooney supposedly handpicked for his finicky wife. A source told the Mirror that George understands why Alamuddin would want a more subtle ring when working with the clients that she does.

You know, people like Julian Assange and the King of Bahrain. It’s not like Amal is serving up justice for the poor and war-stricken. She is rubbing elbows with the world’s elite which is why her sudden declaration to downsize Clooney’s special rock seems a little odd.

There have been rumors for some time that George and Amal may have hit a little rough patch. Amal has a huge problem with Cindy Crawford and that has brought tension to his friendship and partnership with Cindy’s husband Rande Gerber.

Gerber and Clooney go way back years before Amal was ever in the picture so now that their join vacations are strained and stressful, George isn’t having as much fun with Amal.

Not to mention, reports are that Amal Alamuddin is focused on her high powered career and George Clooney is finally ready to start a family. There have been rumors that Amal and George are having a hard time getting pregnant and that will also put a lot of stress on a relationship.

It seems like all the reasons Alamuddin and Clooney got together are the reasons they don’t get along lately so when Amal announced that she wasn’t wearing her engagement ring anymore, the excuse about her rock being too big really sounded suspicious to many fans.

Amal Alamuddin, George Clooney at the Los Angeles premiere of ‘Our Brand Is Crisis’ at the TLC Chinese Theatre in Hollywood, California on October 26, 2015. FameFlynet