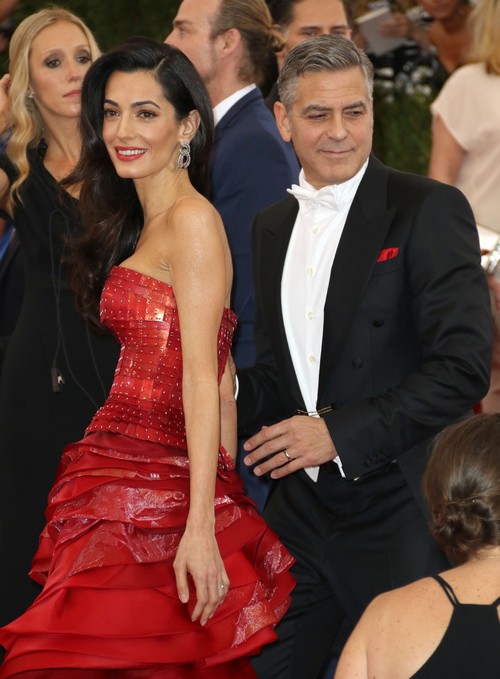 When we heard that George Clooney was marrying human right’s lawyer, Amal Alamuddin, we thought, “cool, someone out there sticking up for the downtrodden and the victimized.” Nope. Turns out Mrs Clooney aka Amal Alamuddin is a human rights lawyer representing human rights violators. That’s a whole different ball of wax. Editor in Chief of the GLOBE, Jeff Rodack, recently wrote spoke against Mrs Clooney’s defense of Muammar Gaddafi’s son and also his spy chief, Abdullah Senussi, who was convicted in Paris for his role in a 1989 bombing of a passenger plane that resulted in the deaths of 170 people – and we have to concur with Jeff’s harsh criticism.

This is not a new thing for Amal Alamuddin – she’s known for fighting to protect the rights of those who have done nothing but violate the rights of others. While it’s true that some of Amal’s early work was to protect legitimately innocent people, in recent years her cases have been much more sordid and seedy. Saif Gaddafi, son of Muammar Gaddafi, was sentenced to death for murder and torture of civilians during the 2011 Civil War in Libya – including a chain of massacres. Amal had fought for Saif to be tried in the Hague and not in Libya where she claimed he could not receive a fair trial.

Of course, none of the thousands of innocent civilians he was charged with killing got a trial at all – much less a fair trial. Why take on the case of such an obviously guilty and horrible defendant? Is it the same reason that Amal Alamuddin took up with George Clooney? For the attention? Prior to meeting Clooney, Amal seemed to be taking herself pretty seriously as a lawyer, but that changed when blogger Natalia Naish named her a top barrister hottie which is rumored to have brought her to the attention of Clooney.

But later, Naish criticized the attorney she once admired saying, “Amal has taken to her newfound fame like a duck to water… she struts her stuff in surprisingly short couture dresses. As the details of their four-day wedding emerge – the caseloads of tequila, the never-ending parade of Amal’s designer dresses, the boatloads of grinning celebrities, and the $13 million price tag – it all begins to seem slightly unseemly and in-your-face, especially for a couple who profess to be extremely private.”

Naish went on to call her the equivalent of Kim Kardashian who had an equally high-profile wedding to Kanye West but says that for two similar situations – price tag, celeb guests and selling the photos to magazines for millions – but Amal was somehow seen as “above” it all. But at least Kim Kardashian isn’t defending war criminals – just her silly husband and her often ridiculous fashion choices. But Kim K is not fighting to let terrorists and genocidal maniacs go free…

So Mazel Tov, George Clooney, on your excellent choice of a wife. If she really wants to stop human rights violations, maybe Amal can more carefully screen her hubby’s screenplays to save us from seeing his smug face in bombs like Batman & Robin, Men Who Stare at Goats, and – please no – another Ocean’s Eleven sequel.