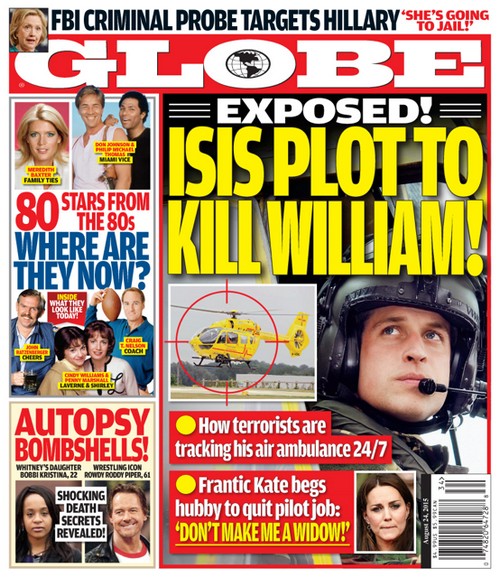 Is Prince William in danger from Islamic terrorists? Is there an ISIS plot to kill Kate Middleton‘s husband? The Royal Family is constantly on high alert, and more than one terrorist plot to kill Prince William and other members of the royal family have been uncovered throughout the years. Prince William is at much greater risk than other members of the royal family though – because he took a civilian job flying an air ambulance, making him an easy target for terrorists, especially ISIS.

This week’s cover of GLOBE Magazine features a photo of Prince William, and the air ambulance that he flies. The headline screams, “Exposed: ISIS Plot To Kill Prince William!” The cover goes on to reveal that the dangerous terrorists have been tracking the Prince’s air ambulance while he is at work. And, Kate Middleton is frantic and has been begging her husband to quit his job and “not make her a widow.” All of the members of the Royal Family are in constant danger of terrorist targets, but Prince William has an even larger target on his back because it is no secret that Queen Elizabeth wants to name him the next King of England.

In other celebrity news, this week’s cover of GLOBE Magazine also teases some new information on the deaths of Bobbi Kristina Brown and professional wrestler Rowdy Roddy Piper. As always our friends at GLOBE get to the bottom of breaking stories, and manage to get their hands on inside information that no one wants to ever see the light of day. The cover teases, “Autopsy Bombshells: Shocking Death Secrets Revealed!” Rowdy Roddy Piper’s death wasn’t surrounded by too much controversy, but we are all eager to hear new information on Bobbi Kristina’s death, and whether or not it can be used to charge her boyfriend Nick Gordon with murder. And for all you 80’s babies, this week’s GLOBE Magazine will also feature an exciting piece on the stars of the 1980’s – and where they are now.

So, do you think Prince William is in danger? Is he foolish to keep working on the air ambulance and putting his life in danger – or is he just fulfilling his duties to his country? Is Kate Middleton being selfish, or does she have a point? Let us know what you think in the comments below and don’t forget to pick up this week’s copy of GLOBE Magazine as soon as it hits newsstands.