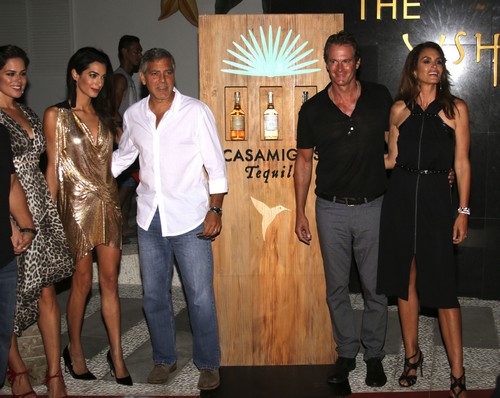 George Clooney threw a huge Halloween party on Friday night and it was the most talked about celeb party of the season. There was something missing from the festivities though and that would be George Clooney’s wife, Amal Alamuddin.

Amal Alamuddin was not on hand for George Clooney’s star studded Halloween party. The Casamigos party was celebrated with Clooney’s tequila of the same name. George co-owns the company with his best pal Rande Gerber. Gerber was on hand for the Casamigos party with his wife Cindy Crawford. Rande and Cindy were dressed as Harley riding Hell’s Angels bikers and their costumes were very well done.

The A-list guest list was so full of huge Hollywood stars that the Casamigos party looked more like the red carpet of an awards show. On hand were the likes of Paris Hilton, Josh Duhamel, Fergie and even Leonardo DiCaprio. Gwen Stefani showed up and fans are going crazy over reports that she spent her evening cozying up to Blake Shelton.

All in all, the Casamigos party was a huge hit and everybody who is anybody in Hollywood showed their face. Well, everyone but the host’s wife. Amal Alamuddin was nowhere to be found during the party thrown by George Clooney and Rande Gerber.

Amal has taken some heat recently over rumors that she doesn’t care for the company of Cindy Crawford. It makes sense that Alamuddin might steer clear of events sponsored by their husbands’ tequila company when Cindy might make an appearance.

Even though Amal Alamuddin keeps up with fashion and always stays put together, she acts appalled that anyone would want to talk about it. Maybe that is why Clooney’s wife opted out of the Casamigos bash. Everyone would have wanted to see the attorney all dressed up and she really isn’t interested in getting attention over a costume. Who would have ever guessed George Clooney would marry such an elitist?

Amal Alamuddin reportedly isn’t interested in the mundane Hollywood chatter. The international barrister prefers to keep talk about foreign affairs and not much else. Amal’s alleged snooty elitist attitude isn’t winning her many friends in Hollywood where what matters are money and looks, not education.

Cindy Crawford has reportedly been trying her hardest to befriend George Clooney’s wife, if for nothing else than to make her husband happy. Unfortunately Amal Alamuddin doesn’t seem to care much about keeping the peace. Instead, it looks like Alamuddin would rather keep her distance and miss out on silly things like Halloween parties.