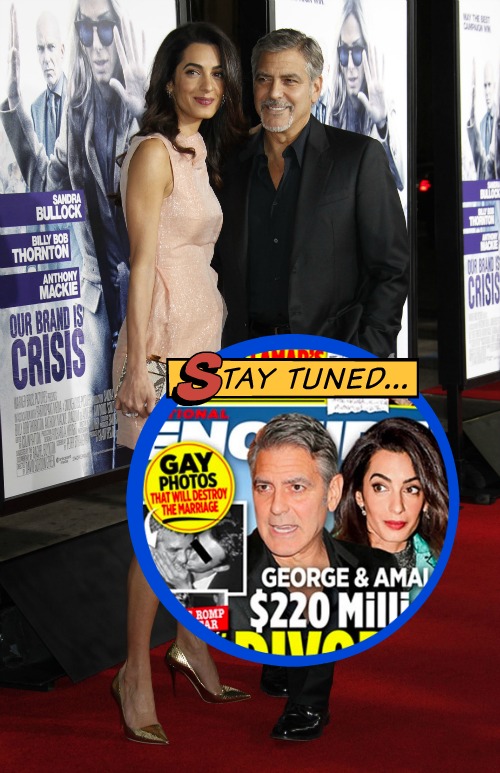 George Clooney and Amal Alamuddin just shocked the world and celebrated their one year wedding anniversary – no one thought the couple would make it this far without filing for divorce. Considering the fact that they are wildly different people, they spend more time apart than they do together, and Amal is insecure about George’s Casanova ways, it truly is a miracle that they haven’t broken up yet. That doesn’t mean they are in the clear though.

According to this week’s cover of National Enquirer – George Clooney and Amal Alamuddin’s divorce is on! That’s not exactly shocking, we are firm believers that the couple is not in it for the long haul. But, the National Enquirer’s reasons behind George and Amal’s alleged break-up have us all scratching our heads. According to the tabloid, George and Amal are on the verge of a split because of “super secret spy pictures” that were taken 20 years ago of George kissing Noah Wyle. Yeah, we couldn’t make this stuff up if we tried to.

The photos are very real – but they aren’t exactly proof of a gay affair, or even close. The photos look very old, and they show George Clooney holding down Noah Wyle and kissing him on the cheek, all while laughing hysterically. It’s clearly just fun and games. But, according to National Enquirer, Amal’s uptight pals are disgusted by the scandal and are trying to convince her to cut George loose over the pictures of him kissing another man.

An insider dished to National Enquirer, “There’s no doubt George never told Amal about these pics of him kissing a dude. While I’m sure prankster George will now laugh them off as a joke, the photos are exactly the sort of thing Amal’s friends suspect — that George is hiding a lot more about his personal life.” The inside source went on to say, “There’s no doubt her pals will tell her now’s the time to get out of the marriage!”

We totally agree – Amal and George’s marriage has a short shelf life, they’re basically on borrowed time as it is. But, when they do file for divorce – it isn’t going to be over photos of George kissing Noah Wyle on the cheek over 10 years ago.