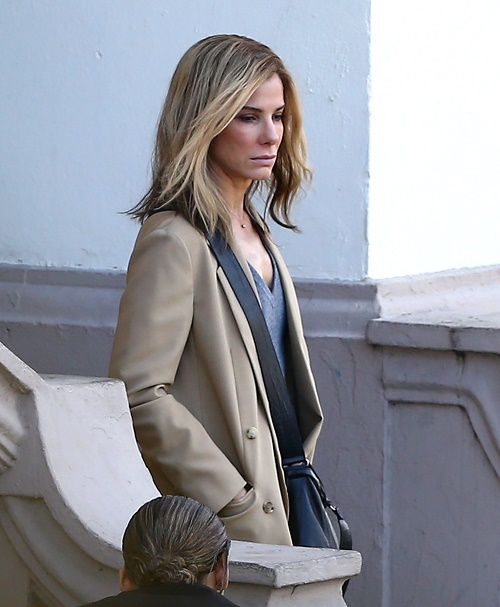 Despite the rumors suggesting that Sandra Bullock and George Clooney were dating in the aftermath of Gravity‘s success, George went and married Amal Alamuddin, renowned lawyer and famewhore extraordinaire. However, now it’s landed on Amal to get her husband’s BFF a new boyfriend, even though Sandy really does just fine on her own.

After her divorce from Jesse James, Sandra Bullock has stayed relatively under the radar in regards to her personal life, even though she’s had plenty of boyfriends in the meantime. She reportedly dated Chris Evans for a while, and she was linked to a host of other co-stars. However, she still hasn’t had an ‘official’ boyfriend since the divorce, and she seems to prefer it that way. She’s one of the biggest celebrities in the world, she’s had multiple Oscar nominations, she’s living in one of the most successful periods of her professional life, and she’s raising a wonderful little boy. What more can one ask for, especially in the cesspool of Hollyweird?

However, because this is Hollywood, no female celebrity of Sandra Bullock’s stature can ever be single for long, which is why the media is constantly trying to set her up with everyone they can find. In fact, sources have been suggesting that Amal has made it her mission to set Sandra up with one of her colleagues. This way, Sandra can also marry a famous famewhore lawyer, and they can have pretentious double dates to their heart’s content. Sandra Bullock and a lawyer boyfriend? The press will have a field day with that one.

Plus, it’s New Years – doesn’t everyone want to have a date on New Year’s? Amal Alamuddin and George Clooney will party with all of their friends, and if that includes Sandra Bullock, that means that she’ll inevitably be set up with an unsuspecting boyfriend candidate – willingly or unwillingly.

Sandra Bullock isn’t taking any chances these days. After stepping out incognito to run errands recently, Sandra has installed a higher fence and cameras around her property and has gotten a German Shepard dog to walk the perimeter of her house in Los Angeles, California on December 31, 2014. Earlier this year Sandra came face to face with her stalker inside her home, which left her shaken from the event, prompting her to take these drastic measures. FameFlynet