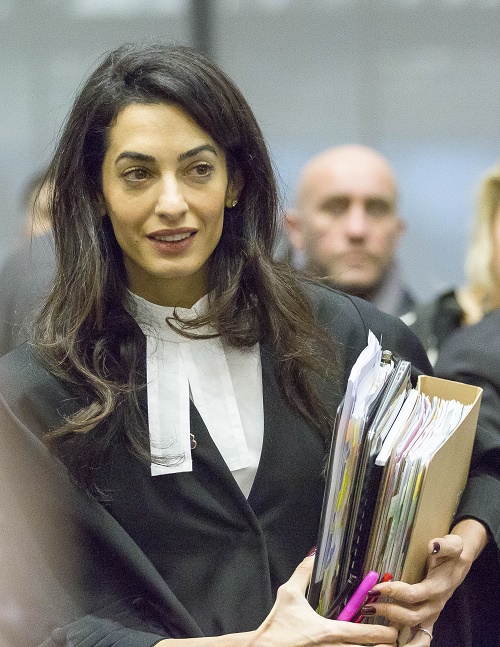 Amal Alamuddin and George Clooney haven’t even been married four months, but apparently her new-found status as Mrs. Clooney is going to Amal’s head. A new report from Star Magazine claims that Amal Alamuddin has been exhibiting ‘diva behavior’ after the marriage, adding that she’s letting her A-list celebrity status affect her behavior with other people.

Star’s source explains, “If the service at hotels and restaurants isn’t perfect, she complains to the staff and is a nightmare to be around in general. Amal [now] flips out over things like towels not being folded just so and the pillows not being perfectly plumped.”

Um, do these people really think that marrying George Clooney caused Amal Alamuddin to transform into a diva? Do they not realize that she was one of the most highly sought after barristers in London? And that there were men frequently falling at her feet to go out with them? No matter what you think of Amal’s personal politics or the cases that she’s taken in her career thus far, there is no denying that Amal was a household name among political circles even before she met George. Sure, now the whole world knows who she is and what she does, but to her, she was always A-list. Yes, marrying George Clooney allowed her to enter the elite circles of Hollywood, but if she really wanted, she could have done it without George Clooney. Political A-list > Hollywood A-list, any day of the week.

Star also claims that George Clooney is ashamed of Amal’s new diva behavior, and often ‘apologizes for her actions‘. See, that I cannot believe – George Clooney is incredibly proud of having Amal Alamuddin as a wife, diva behavior and all. Plus, how is one diva supposed to tell another diva to tamp down her behavior – especially without being a hypocrite?