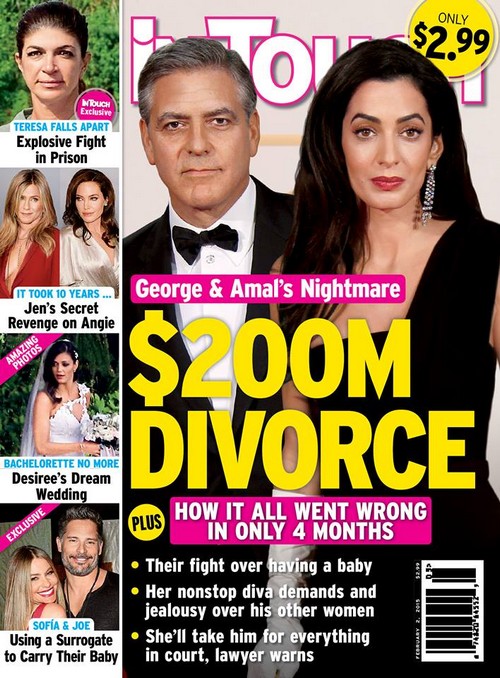 George Clooney and Amal Alamuddin have been married less than four months, but that hasn’t stopped the public from speculating on divorce and the state of their marriage. In fact, several sources have claimed that George and Amal are in a sham marriage heading to divorce, despite appearances to the contrary. But then again, this shouldn’t be surprising to anyone who lives in Hollywood, works in Hollywood, or has even a passing knowledge of how relationships in Hollywood work.

But you know, one can’t blame Amal Alamuddin for getting sucked into the glamour so quick, only to realize that she might have made a mistake. In Touch Weekly’s sources explain, “Amal feels like this is not what she signed up for. She and George had a very short courtship, and Amal thought he was this glamorous, international gentleman. Now she’s seeing a different side – the one who behaves like a Hollywood playboy, dated bartenders and women like Stacy Keibler, takes Hollywood too seriously and is a more typical American guy than the James Bond type she thought she had married.”

Apparently, Amal and George are ‘at odds’ about George’s friends, having children, where to live, and basically every other thing that married couples usually fight about. Only in this case, it’s apparently all make-or-break arguments.

Look, Amal and George just got married, and it hasn’t even been six months yet. Yeah, I can see this relationship imploding, but George Clooney ain’t a complete moron. Let’s wait another six months before seeing how long their honeymoon period lasts. But knowing George Clooney, his flirting with other women and his insistence on having Amal move to Hollywood might be the nail in the coffin of their marriage. Will they end up getting divorced over it? Again, I don’t see a divorce happening within the next six months, but after that? It IS Hollywood.

What do you guys think? Are George Clooney and Amal Alamuddin in a ‘sham marriage’? Will they get a divorce? Let us know your thoughts in the comments below.