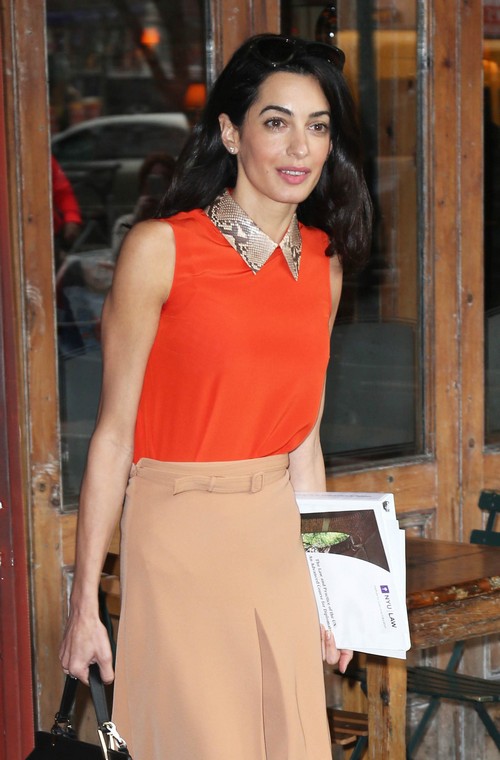 Amal Alamuddin apparently doesn’t want to be a socialite, y’all. I would believe this, if there was any truth to it. If Amal Alamuddin doesn’t want to be a socialite, then why is she always getting photographed with all the important people of New York and everywhere else she goes? Why does Amal go out of her way to attend all the red carpets and all the fancy Hollywood events?

Amal is featured in a long, ass-kissy article from the New York Times, where famous figures in NYC high society basically suck up to her. For example, Tina Brown told the NYT, “I think she has a natural charm. She talked about her cases. She is serious about her work. She is not into being a socialite.”

Right. This is someone who’s serious about her career, especially since she’ll now be teaching a class at Columbia, which is as upper-crusty as it gets. However, it also means that she’ll be spending less time with her new husband, George Clooney. Sure, he’ll probably be equally as busy with producing and acting, but will he accept the fact that his wife is as busy as him? Most people – especially in Hollywood – can’t stand their significant other being more/less successful than them, and it usually leads to problems later on.

In this particular case, I don’t think either George Clooney and Amal Alamuddin will get divorced over their inequality, but if Amal keeps social climbing at this pace, then it will definitely become an issue later on.

Do you guys think that George Clooney and Amal Alamuddin will get divorced over Amal’s busy schedule and growing fame? And do you think it’s laughable that people are going out of their way to say that Amal is not a socialite – perhaps because that’s the impression that she’s accidentally put out? Let us know your thoughts in the comments below.

Amal Alamuddin is seen leaving Morandi in New York City, New York after enjoying lunch on April 7, 2015. Amal has been busy as of late teaching a series of lectures at Columbia University.

Stars on the set of ‘Money Monster’ in New York City, New York on April 11, 2015. George Clooney, Jack O’Connell and Jodie Foster were all spotted on the set