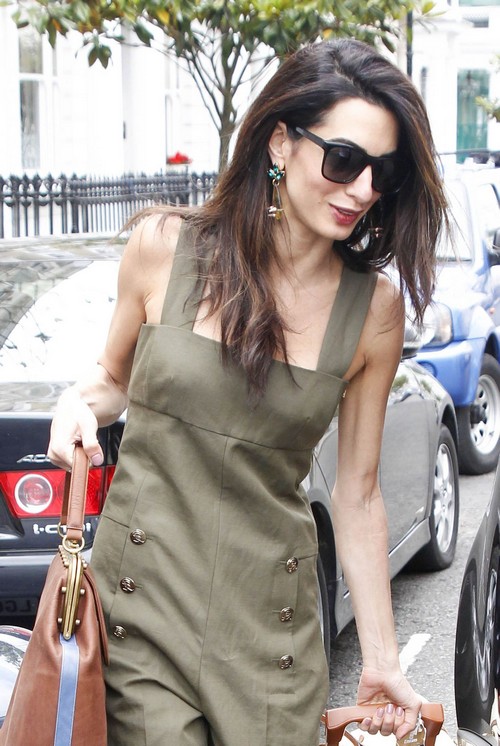 George Clooney and Amal Alamuddin’s marriage is on the rocks, in the midst of a rumored divorce Amal’s health appears to be on the rocks too – and her pals fear that she has turned to anorexia to cope with the stress of her career and her new Hollywood lifestyle. When George Clooney’s new wife Amal Alamuddin walked down the aisle almost a year ago in their lavish Italian wedding, she was a glowing and healthy human rights attorney, who considered herself above and beyond Hollywood. Now, she reportedly weighs in at less than 100 pounds, is obsessed with her appearance, and literally killing herself trying to keep her marriage afloat, her work commitments, and making sure she doesn’t miss a red carpet event.

A divorce can be stressful to anyone, but when you are juggling a career as a high-profile attorney on top of a Hollywood lifestyle – we can see how it would run anyone down. But, it has definitely taken an unexpected toll on Amal Alamuddin. A pal close to Amal dished to Star Magazine, “She was much healthier before she met George. People are wondering if she has some sort of illness or she is just not eating enough. Her inner circle thinks it may be anorexia. They think it has gone beyond dieting and not getting enough to eat and she has taken a serious medical turn and genuinely needs help.”

We get “for better or for worse,” but it’s no wonder George Clooney is ready to pull the plug on his marriage. He thought he was marrying a healthy and brilliant human rights attorney who could care less about Hollywood or style, and now he has a wife who appears to be starving to death and has her own personal stylist, and seems to care more about red carpet events than her career.

Do you think Amal Alamuddin is really anorexic? Is it a result of being stressed over her marriage and possible divorce? Or has she just become that vain and worried about her appearance? Let us know what you think in the comments below!