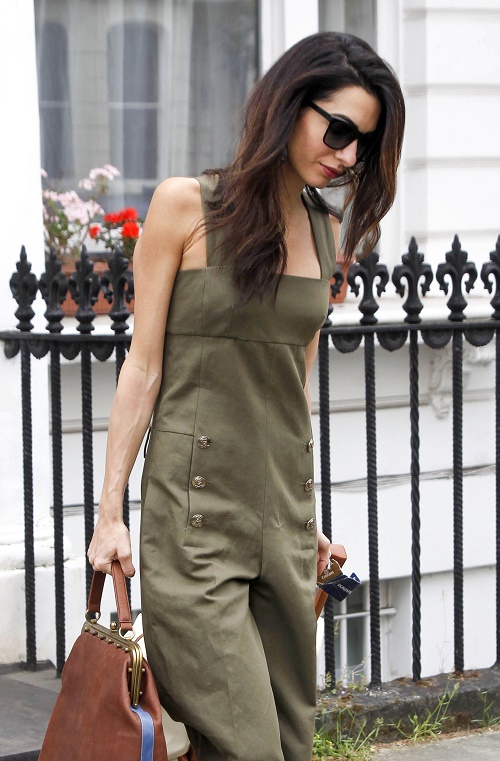 Is George Clooney’s wife Amal Alamuddin anorexic? Since George And Amal got married in September 2014 in Italy, the human rights attorney has dropped from an already thin 128 pounds down to a dangerously skinny 98 pounds. The last few red carpet events that George Clooney has arrived at with his wife Amal Alamuddin on his arm, witnesses have literally stopped and gawked at how skinny and bony Amal appears. She looks like she is going to keel over as soon as the wind blows!

When George Clooney married Amal Alamuddin, she was a high-profile human rights attorney, based in England – and overall a well respected career woman. Although at first Amal Alamuddin despised Hollywood and red carpet events, she soon was romanced by all of the A-List parties and designer dresses, and now she refuses to miss a red carpet event and has even hired her own stylists and make-up artists. But, she is still trying to juggle her career as an attorney with her new lavish Hollywood lifestyle, and it is obviously taking a toll on her.

The July 20 edition of GLOBE Magazine reveals, “Amal desperately needs to put on some weight. Her arms are so thin and her collar bones jut out sharply. She looks like a walking skeleton. She has lost so much weight there are fears she is suffering from anorexia.”

GLOBE Magazine’s source goes on to dish that Amal has stretched herself thin (literally and figuratively) between jet-setting back and forth from her job to red carpet events, on top of trying to oversee the renovations and her and George’s new home in England. Of course, all of those pesky divorce rumors and arguments over whether they should or should not have a baby probably aren’t alleviating any of Amal’s stresses.

Have you seen pictures of Amal Alamuddin lately? Do you think she could be anorexic, or is the media over-reacting? How do you feel about her “selling out” and getting smitten with the Hollywood scene? Let us know what you think in the comments below!