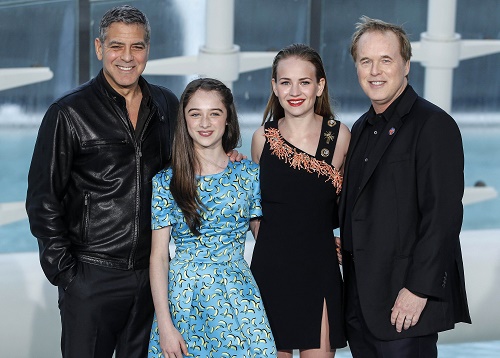 George Clooney has no intention of getting his wife Amal Alamuddin pregnant, and it will be a miracle if the couple makes it to the one-year wedding anniversary without getting a divorce. The actor and attorney can’t seem to agree on anything, but the one fight that is single-handedly destroying their marriage is whether or not they will have a baby and start a family. Amal Alamuddin isn’t exactly a young woman and her biological clock is ticking – but George Clooney has made it very clear that he doesn’t want his wife to get pregnant, and even admitted that he doesn’t want kids in a recent interview.

George Clooney sat down in an interview with Charlie Rose on CBS This Morning. Naturally. his marriage with Amal Alamuddin came up and Rose asked George if they were planning on starting a family soon. Clooney’s response was – shocking, to say the least. The actor replied, “I don’t really think about it. I mean, I’ve thought about it, I suppose, but it hasn’t been high on my list. I’ve been asked [about kids] a lot lately because I’ve gotten married and I’m doing a movie with kids in it.”

When you get married, how does the topic of whether or not you are going to have kids not come up? This is a perfect example of why you shouldn’t rush into marriage, and should discuss what you expect in the future before you throw a lavish Italian wedding.

Who can really fault Amal Alamuddin? Generally, when you marry a man, having kids is the next step in the relationship, and she and George don’t have a whole lot of time to waste seeing as how they are a little bit older than most newlyweds. Then again, maybe in the beginning George had every intention of starting a family with Amal – but now that he realizes the odds of them not getting a divorce are slim, he doesn’t see the point in dragging kids into a messy break-up.

What do you think? Is having kids a deal breaker for Amal Alamuddin, will she divorce George Clooney if he refuses to get her pregnant? Or is their marriage basically over already, and George is just trying to avoid making it messier by dragging a defenseless baby in to it? Let us know in the comments below!