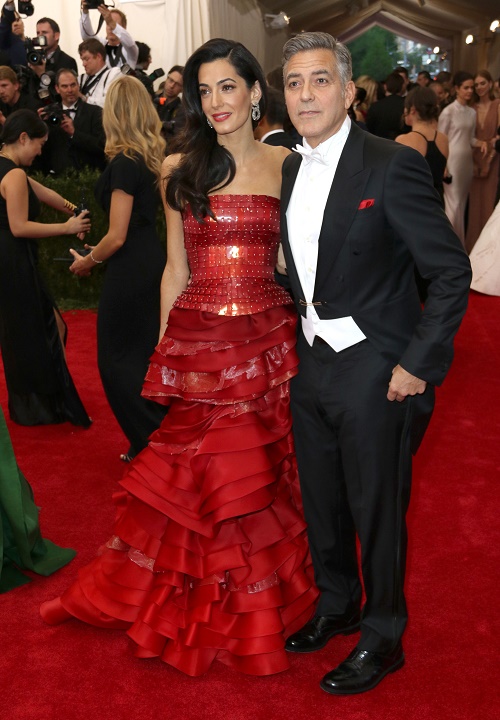 George Clooney and his wife Amal Alamuddin are already getting a divorce – just seven months after their wedding in Italy. Since their marriage began George and Amal have been fighting incessantly, the high-profile attorney apparently thought that she could change America’s most eligible bachelor – and is now realizing that isn’t the case. The couple have been fighting non-stop over whether or not to have a baby, what country they should live in, their work schedules, and according to a new report they have even been fighting over George’s love for sports.

During a recent appearance on Extra, George Clooney discussed his marriage to Amal Alamuddin with host Mario Lopez. Clooney admitted that his love for watching sports on TV drives Amal insane, and she hates that he wants to sit around and watch sports every weekend. George dished, “I watch sports, and it kills her. I got her into March Madness a little, I’m a huge Kentucky fan, so she got into that, but it was enough. So the next week was the Masters, and I’m watching that and she goes, ‘So every weekend we’re gonna be watching a sporting event?’ I’m like, ‘Actually that’s how it works.”

It sounds like Amal Alamuddin basically wants George Clooney to stop acting like an American – she has a problem with him hanging out with his best-friend Rande Gerber, she allegedly hates Hollywood events and other American celebrities, and now she doesn’t even want George to partake in some good old-fashioned American sports traditions. Seriously, when Amal Alamuddin is done molding George Clooney into her perfect husband he is going to be unrecognizable.

This week’s Life & Style revealed that Amal Alamuddin and George Clooney are amidst some messy divorce proceedings – because of George’s alleged cheating. At this point, is anyone really shocked that George would cheat on his wife? First of all, monogamy was never really his thing, and secondly, Amal Alamuddin sounds like a dictator, not a wife.

Are you shocked that George and Amal are getting a divorce – or are you just shocked that their marriage lasted this long? What do you think of Amal trying to ban George from watching American sports? Let us know in the comments below!