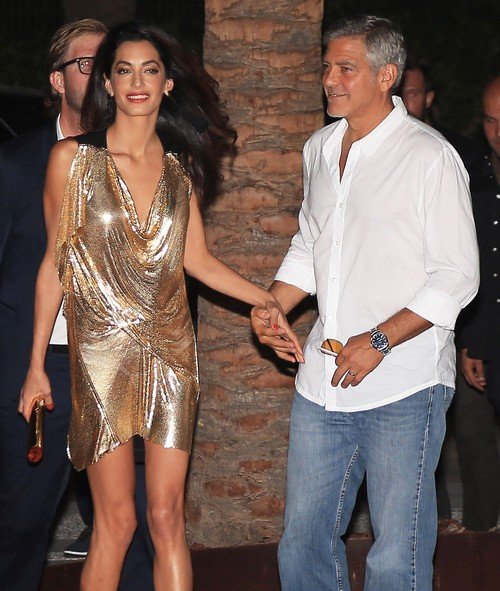 Did Amal Alamuddin mock Cindy Crawford by saying the supermodel looks like Caitlyn Jenner? The catty remark allegedly made Cinrdy furious with Amal and now Crawford wants a make-over.

The buzz is that Alamuddin was dining at a popular Los Angeles restaurant with Cindy, hubby George Clooney and Crawford’s hubby Randy Gerber. A source inside the restaurant told Star that Amal was joking around and told Cindy that Caitlyn could be her twin.

The fellow diner – it could have been a member of the wait staff – says that Amal was giggling and Cindy sat there completely stone-faced. Did Amal Alamuddin mean this as a compliment or an insult or merely an observation?

When Caitlyn Jenner’s Cosmopolitan cover was revealed, it was noted that Caitlyn looked an awful look like Crawford, almost as if she had taken photos into the plastic surgeon and asked for the “Cindy Crawford.”

Maybe Alamuddin was just commenting on the observation and something else made her laugh? Now Crawford is getting an “anti-Caitlyn makeover”? An insider claims Cindy wants a short haircut and is going to start wearing glasses.

“She doesn’t ever want to be mistaken for Caitlyn again!” the source revealed. The insider states that Crawford has no problem with anyone being transgender, but no woman wants to be told that she looks like a man who’s had a sex change.

Amal’s Caitlyn comparison upset Cindy so much the entrepreneur is going to chop off her signature locks and start wearing glasses? That seems a little extreme. That’s if Crawford did respond to Amal’s comment in such a manner.

Was it Caitlyn’s intention to look like Crawford post-op? Isn’t that a compliment? Imitation is the sincerest form of flattery isn’t it? If Amal Alamuddin and Cindy Crawford start feuding over the Caitlyn Jenner comparison it could cause tension between the guys best buddies George and Randy.

But we’re betting this was just an observation – after all, Caitlyn does look a bit like Cindy now. Let us know what you think in the comment section below and come back to CDL for all the latest celebrity news and gossip.