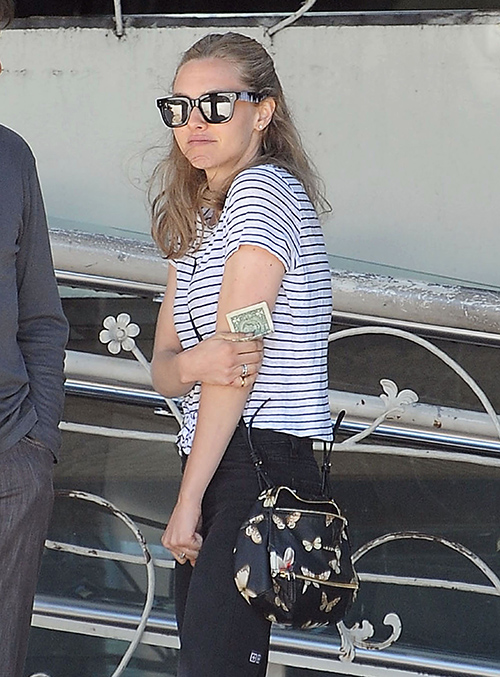 Amanda Seyfried is having a secret affair? Is “The Way We Get By” co-star Thomas Sadoski to blame for Amanda’s split from Justin Long? Is a romance with Seyfried the reason Sadoski’s filed for divorce from Kimberly Hope?

After two years together, Amanda dumped Justin in September 2015. The general “we care for and respect each other” press released followed the parting of ways. What was the real reason behind Seyfried’s split from Long? Was Amanda involved with someone else? All signs pointed to a possible hook-up with Thomas – and that is allegedly why Amanda cut Justin loose.

What happened? Amanda took off for New York to make her debut in an off-Broadway play. Insiders revealed that sparks flew almost immediately between Sadoski and Seyfried. Those sparks weren’t just on-stage, the co-stars began a cozy off-stage relationship, too. It didn’t take long for NYC and Hollywood to start buzzing with speculation of a romance between Amanda and a very married Thomas.

Sadoski filed for divorce from Kimberly Hope in October 2015 after eight years of marriage. Reportedly Amanda and Thomas are now “lying low to avoid bad publicity” until Sadoski’s divorce is final. According to OK!, reps for both actors deny any affair. But isn’t it convenient that Amanda cut an unsuspecting Justin loose just a few weeks before Thomas Sadoski filed for divorce from Kimberly Hope?

At the time Amanda Seyfried and Justin Long split insiders revealed that the couple parted ways two months before the official announcement. Those in the know were quick to point out that Long and Seyfried never lived together – as if that somehow justifies Amanda sneaking around with a married man.

Poor Justin hasn’t had much luck when it comes to relationships. He can’t seem to get past the two-year mark with anyone – except Drew Barrymore, who the actor dated for three years. When Drew and Justin parted ways it was reportedly because Barrymore was dating Cort Cass, an ABC executive, on the sly.

Are the rumors that Amanda Seyfried parted ways with Justin Long to be with Thomas Sadoski true? If the co-stars are in love, then, eventually, the truth will come out. But probably not before Sadoski’s divorce is final.