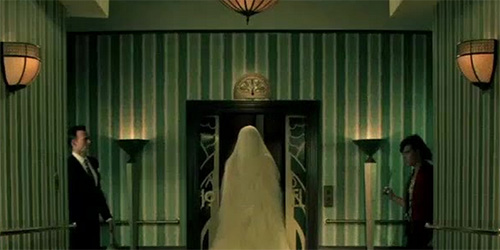 “American Horror Story” season 5 spoilers have been rolling in all summer, and it looks like the Fall 2015 season of the FX drama might just be the best yet – if that is even possible. Fans have been buzzing about the upcoming premiere for months, ever since it was revealed that Lady Gaga (yes THE Lady Gaga) had joined the upcoming cast. Spoilers indicate that Season 5 of “American Horror Story” will premiere on Wednesday, October 7 – but there is an all new promo video just released that gives us a taste of what we can expect.

As always, Ryan Murphy and the producers of “American Horror Story” do not disappoint. The all new promo video for season 5 features what might be the creepiest hotel we’ve ever seen. We won’t be making reservations anytime soon! The spoiler video also give AHS fans a sneak peek at the Season 5 cast, the stars featured in the trailer are: Lady Gaga, Sarah Paulson, Kathy Bates, Angela Bassett, Wes Bentley,Matt Bomer, Chloë Sevigny, Cheyenne Jackson, Evan Peters and Finn Wittrock.

“American Horror Story: Hotel” might just be the most anticipated season of the FX drama yet – and we are literally counting down the days until the season 5 premiere air date. Lady Gaga’s television debut looks like it will be an epic one. Ryan Murphy recently dished on her AHS character in an interview that Gaga’s character is a countess – and hungry for blood. There are also spoilers floating around that she star in a hot and steamy sex scene with four other characters, including Matt Bomer. If that isn’t enough to get you excited, then we aren’t sure what will!