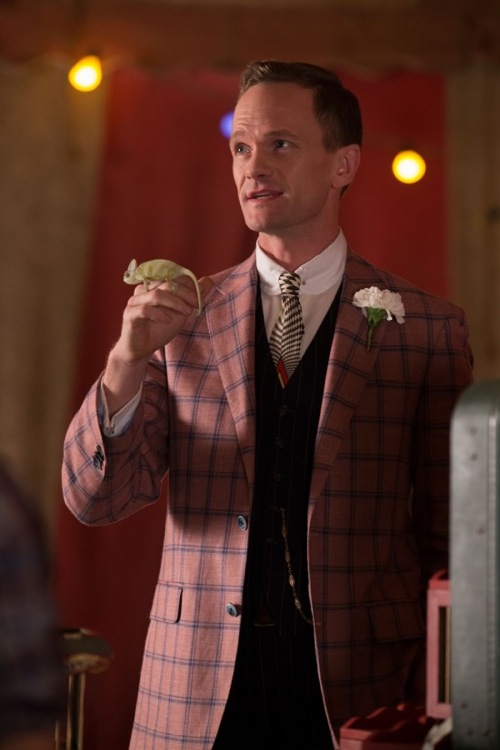 Tonight on FX our favorite creepy drama American Horror Story: Freak Show starring Jessica Lange and Kathy Bates continues tonight with an all new Wednesday December 10, season 4 episode 11 called “Magical Thinking,” and we have your weekly recap below. On tonight’s episode Elsa prepares for her move to Hollywood. Meanwhile, Dell plots an escape plan for Jimmy.

On the last episode before the holidays the death of a Freak sparked troubling behavior in Pepper. Elsa revealed the history of the Freak Show. Desiree grew suspicious of Maggie.  Did you watch the episode?  If you missed it we have a full and detailed recap, right here for you.

On tonight’s episode as per the FX synopsis, “Elsa prepares for her move to Hollywood. The Twins grow enamored with a traveling salesman. Dell plots Jimmy’s escape from police custody. Written by Jennifer Salt; directed by Michael Goi.”

Stanley visits Jimmy in jail and says he might know how to raise the funds for his legal fees: give up his “claw” hands. Jimmy’s not sure at first, but Stanley tells him he’ll just need to give up his left hand. Jimmy agrees to this and Stanley hands him something in a small vial that makes him violently ill. Jimmy starts puking. The prison guard rushes in to see what’s wrong, and Stanley says Jimmy needs to get to a hospital immediately. The cop reluctantly agrees to let him leave the prison. Jimmy’s rolled out on a stretcher and placed in the back of an ambulance car, which is being driven by Stanley’s male escort friend (who’s not exactly a genius). He’s dressed up like a paramedic.

In the car, Stanley tells Jimmy that he’s “in his hands now” and proceeds to sedate him. Later, Jimmy wakes up in a hospital bed. He’s shackled to the bed. He looks down at his arms: BOTH of his hands have been removed.

Back at camp, the twins are beginning to accept their spot in the freak show. They admit that their top priority at the moment is sex. They’re interviewing potential candidates for the “job.” They burn their beloved diaries in an oil drum, as they say they no longer have any need to keep secrets from one another.

Dell visits Jimmy. Jimmy fills him in on what happened with his hands, and Dell tells him that he never should’ve trusted such a “lying prick.” There’s a tray of food on the bedside table. Jimmy’s hungry and politely asks his father if he could help him out. Dell, who has a very caring nature beneath his tough skin, obliges and begins feeding his son. In between bites, Jimmy reveals that he’d like to buy the show from Elsa when she leaves.

Dell says that he loves that idea, and that they could go in together on it — Toledo & Son Freak Show! he exclaims. Jimmy asks why Dell wasn’t born with the claws; Dell, in a tender moment, reveals that he was the black sheep of his family. Both his brother and father had the claws and, because he was born with ten normal fingers, he was treated like the biggest freak their ever was. Dell admits that when his son (referring to Jimmy, of course) was born with claws, he took one look at those hands and made a run for it. It brought back too many painful memories. “I’m almost fifty years old,” he says, “and here I am feeding my son for the first time.”

Chester tries to persuade Elsa to let him into the show. She tells him that this is a Freak Show, not a magic show, and that there’s really no room for him. Next, he brings out his puppet and does a ventriloquism number — but Elsa’s also not having that. He asks her then if it’d simply be all right for him to sell his chameleons before the show — he’d split the profits with her. She tells him “nobody wants to purchase baby lizards.” He says that that’s not exactly true and shows Elsa his books filled with numbers. Elsa’s impressed with his bookkeeping skills and says that, perhaps, he could warm up the crowd before the show in exchange for assisting Elsa with the books. Of course, the conniving Elsa Mars has other things on her mind — perhaps a hopeful business deal. He’s speechless. He expresses his enthusiasm to his creepy puppet, Marjory. He gets down on his knees to kiss Elsa’s hands. “You have given me, and Marjory, a family.”

Later, Chester is preparing his makeup for his first number. He’s hearing the voice of his puppet, Marjory, in his mind. He’s clearly suffering from some sort of mental disorder. The puppet’s demeanor is slightly harsh and abrasive and ridiculing, which causes Chester to lash out in anger. The puppet’s character consumes him, controls him.

Dell visits Elsa. He’s raging mad, as he should be. He demands to know where Stanley is. After he tells Elsa what Stanley encouraged Jimmy to do, Elsa tells Dell that he must get Jimmy out of that hospital before he’s sent back to jail. He storms out of the tent. Amazon Eve follows Dell out and offers her help — she wants to, in a way, put what happened between Dell and her to rest. The important thing now is that Jimmy be rescued, before any more harm comes to him. Dell asks her to follow him. They walk off together.

Chester visits the twins. Bette is excited to see him. He performs some magic and says that he’s gotten them a present. It’s a music box with two dancers inside. He also says that he found something else in the camp’s storage: A genuine magician’s sawing box. He reveals the secrets behind the sawing-a-person-in-half magic trick. He says the key to magic is distracting the audience and that he would like the twins’ help to do this in his act. Dot takes offence to this and asks if it’s because they’re freaks. Chester says, no, absolutely not. He says it’s because they’re beautiful. He has this fantasy of two ladies having sex on a bed while he watches, alongside Marjory, his puppet.

The cops come for Jimmy. He’s loaded up and being transported in the back of a squad car.

Eve jumps out into the middle of the road and throws a rock at the windshield, causing the car to drive off the road. The cops get out with their guns. Dell jumps out of the bushes and knocks one out. Before Eve is shot by the second cop, Dell whacks him on the head — and he proceeds to hit him, until his skull is bashed in and destroyed.

The twins visit Chester in his trailer. He’s talking to Marjory. The twins want Chester to take their virginity, but he’s reluctant to do so and freaks out. His head starts to ache, which he says happens when he gets worked up. The twins rub his shoulder. “So you’d really involve me?” Bette says, “Oh, yes. We’ve heard it’s many men’s fantasies to be carnal with two women at the same time.” Marjory, the puppet, says, “NOT HIS!” Chester tells her to shut up.

Chester is taken back to that fantasy with the two women. One of the women says that his puppet is creepy.

Back in the real world: Chester agrees to have sex with them, but he wants to have Marjory close by. She relaxes him. Dot says, “Whatever you need,” when he asks if she can join in on the fun.

A private detective shows Dandy pictures of the twins having sex with Chester. He starts crying and is upset. “They were supposed to be mine,” he says.

Meanwhile, Chester’s trying to put Marjory back in her crate, but she’s not allowing it. We’re taken back into his past and see that his wife’s lover, the other woman that was on the bed, has stolen his dummy. Chester grows furious, especially when the woman tells him that he’s off his rocker. She tell him that he’s sick in the head. He has a vision of Marjory in human form, who tells him they need to get rid of her — and the wife.

Present: Paul comes in to talk with Chester about the state and future of the show. Turns out that Chester purchased the show and the company from Elsa.

When Chester’s talking with Elsa, he asks her if she’s planning on taking all of her things in the tent with her to Hollywood. She tells him no but also asks if the stuff’s a bit too feminine for his tastes. He says that this tent will belong to Marjory in the future, and that he thinks it will suit her quite well. He confirms that Marjory will be the headlining act.

Later, Chester returns to his trailer to tell Marjory the news. One problem: Marjory’s not there. She’s been stolen from her crate.

Chester runs to find Marjory in the Big Tent. She says that she wants him to saw the twins in half — for real.

Elsa gets a visit from Maggie. She tells her that there’s something she needs to see.

Dell returns to his trailer. Desiree’s also back. She says that there’s no more time for lies. Holding him at gun point, she wants him to admit who he killed and how.

Meanwhile, Maggie shows Elsa the body of Ma Petite in the glass jar, which they undoubtedly recovered during their adventure to the museum filled with illegally acquired freak show specimens.

Dell breaks down in tears and says that he killed Ma Petite — he smothered her.

Just as soon as he gets the words out, a bullet enters his skull. But it’t not Desiree holding the smoking gun. . .

Elsa killed Dell. “That’s all I needed to hear,” she says.