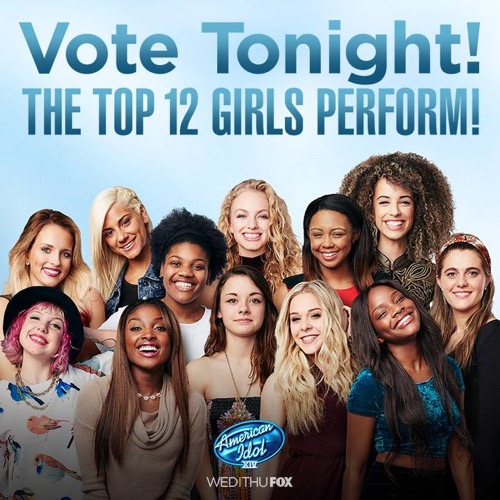 It’s another exciting night of American Idol on FOX with an all new Thursday February 26, season 14 Episode 16 called “Top 12 Girls Perform” and we have your weekly recap below. On tonight’s episode, The Top 12 female singers perform.

On tonight’s episode as per the FOX synopsis “don’t miss your chance to have your say! Watch as the Top 12 girls perform and America votes on who will advance in the battle to become the next AMERICAN IDOL!”

#AmericanIdol starts now. The top 12 women are performing on stage in Detroit. Ryan Seacrest welcomes Harry Connick Jr, Keith Urban and Jennifer Lopez. Lovey James is up first tonight. She performs One Republic’s Love Runs Out. Harry says it was a good song choice and Keith says it got better as the song went on. JLo also gives it warm praise. To vote for Lovey, you text 1 to 21523.

Adanna Duru goes next and she performs Clean Bandit’s Rather Be. Keith says it was great and showed her capabilities. JLo says Adanna is out for blood and says to watch her control. Harry says it was a little out of control when it was loud but was very strong overall. To vote for Adanna, you text 2 to 21523.

Next up is Alexis Gomez who calls herself a Mexican hillbilly. She has her guitar out and performs Miranda Lambert’s Gunpowder and Lead. Harry says she’s so natural but says not to fake a twang. Keith says to unload the guitar if she’s not comfortable with it. JLo says she loved it and encourages her to play around with her mix. To vote for Alexis, you text 3 to 21523.

Joey Cook is up next with her accordion. She sings Keith Urban’s Somebody Like You and he laughs the moment she begins because he recognized his own song. JLo says it showcased who she is. Harry says if he and Keith had a kid, that’s what the music would sound like. Keith says artists make songs their own and calls it perfect. To vote for Joey, you text 4 to 21523.

Next up is folk artist Katherine Winston. She performs Taylor Swift’s Safe and Sound. Keith says it was beautiful and she had gorgeous tone. He says to feel more. JLo says she’s captivating and has a magical quality to her voice. Harry says he questions song choice and says ballads may be a problem but Jennifer says no. To vote for Katherine, you text 5 to 21523.

Shannon Berthiaume goes next and she’s chosen Pink’s Who Knew. Harry says her lack of polish is a great quality but she needs to be more energetic. Keith says Pink’s songs are vocally challenging but wasn’t the right choice for her. JLo says the guys are write and she needs to believe in herself more. To vote for Shannon, you text 6 to 21523.

Next up is aspiring actress Loren Lott. She sings Jo Jo’s Note to God. JLo calls it a brave performance and says good job. Harry says it was powerful and Keith says she’s giving everyone a run for their money. To vote for Loren, you text 7 to 21523.

Shi Scott performs next and does Rihanna’s Umbrella. Keith says she really didn’t get him with that song choice. JLo says that song didn’t show the best of her. Harry says she’s talented but it wasn’t the right song for her. To vote for Shi, you text 8 to 21523.

Next up is country girl Maddie Walker who selected Shania Twain’s Love Gets Me Every Time. Harry says her voice is thick and sounds older. He calls it a solid performance. Keith says that wasn’t a great Shania song choice but calls her voice compelling. JLo says it wasn’t a great song to wow people on an elimination night. To vote for Maddie, you text 9 to 21523.

Sarina-Joi Crowe sings next. This is her fourth time on Idol and she’s hoping it’s the charm. She sings Jessie J’s Mamma Knows Best. JLo says she just rivaled Jessie J on the song and calls it impressive. Harry says she looked and sounded great and calls it strong. Keith says it was the perfect balance of loose and tight. To vote for Sarina, you text 10 to 21523.

Jax is next and she sings Bang Bang by Nancy Sinatra (and Jessie J and Nicky Minaj more recently). Keith says he loves her artistry and calls it killer. JLo says it should get her through to next week and Harry says it was a great job. To vote for Jax, you text 11 to 21523.

Last tonight is high-schooler Tyanna Jones. She does Lips Are Movin by Meghan Trainor. Harry calls her ridiculously talented. Keith says not to be afraid to tell the band she can sing in a higher key. JLo tells her to just be her and says her voice is from God. To vote for Tyanna, you text 12 to 21523.

That’s it for American Idol tonight. Voting is open and Ryan calls the ladies out for one more round of applause. He says the guys will be singing next Wednesday.