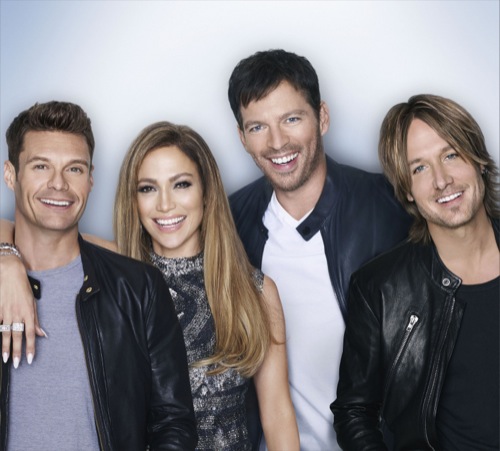 It’s another exciting night of AMERICAN IDOL on FOX with an all new Thursday January 8, season 14 Episode 2 called “Auditions #2” and we have your weekly recap below. On tonight’s episode, the conclusion of the two-part Season 14 opener features preliminary auditions.  Do you want to read some spoilers of what is going to go down this season?  If you do we have you covered, right here.

On the last episode, everyone’s favorite singing competition returned for its highly anticipated 14th season. The fun began when host Ryan Seacrest and returning judges Jennifer Lopez, Keith Urban and Harry Connick, Jr., traveled to Nashville, TN, to discover the city’s best talent. This season promises to deliver the most talented group of singers yet and, as always, it’s up to the viewers to root and vote for their favorite contestants. Did you watch the season 14 premiere episode 1? If you missed it, we have a full and detailed recap right here for you.

On tonight’s episode as per the FOX synopsis “the search for a superstar continues onto it’s second part, find out who get’s a chance at becoming the next American Idol.”

Tonight’s episode of American Idol kicks off with auditions in Nashville, where contestants are having nervous breakdowns in the holding room. Up first is Andrew, a 22 year old from Alabama. He gives himself a peptalk in the bathroom and reassures himself that the judges will love him. Andrew heads out in front of judges Jennifer Lopez, Harry Connick Jr, and Keith Urban and announces he is singing “Signed, Sealed, And Deliver,” by Stevie Wonder. Harry says that he is just “being silly,” and tells him to give them ten seconds of something serious. Andrew breaks out in to another rendition of “My Girl.” Harry votes “yes,” and Jennifer and Keith agree – Andrew is getting a gold ticket and going to Hollywood.

The next singer to audition for American Idol is Loren Lott, a 21 year old hailing from San Diego California. She breaks in to her version of “Treasure” by Bruno Mars. Harry is unimpressed though, he says that she “sounds like an actress that is singing,” and tells her to sing a different song that sounds more like her. After her second attempt, Keith votes “yes.” Harry disagrees and thinks that Loren has star quality – but singing isn’t for her and votes “no.” It’s up to Jennifer Lopez – and she decides to give Loren a golden ticket and give her another shot in Hollywood.

17 year old Texan Trevor Douglas is the next singer to audition in front of Harry, Jennifer, and Keith. Trevor announces that he is singing “Sing” by Ed Sheeran. Jennifer says that she likes Trevor’s “cool geeky quality” and she loved his falsetto. Harry Connick Jr. raves about Trevor’s confidence. The judges’ decision is unanimous, Trevor Douglas is going to Hollywood with a golden ticket.

Single 23 year old Mom Kelley is the next singer to audition in front of the judges, she brings her 3 year old daughter Hope in to the audition room with her and she sings “Let It Go” from Frozen for the judges. Afterwards she sits on Jennifer’s lap while her mom Kelley sings “Sunday Morning.” Afterwards the judges don’t even have to discuss Kelley, they hand her a Golden Ticket to Hollywood. Unfortunately 15 year old Cammie’s cover of an Adele’s song is not quite as successful – and she leaves the audition room in tears.

Garrett Miles is escorted in to the audition room by his father, 25 year old Garrett has been blind since birth. Garrett performs a cover of “Proud Mary,” and impressed the judges. Keith raves that he “likes his style and the way he sings.” Harry Connick Jr. informs Garrett that he has a gift. Then, Garrett surprises the judges with a rendition of Jennifer’s song from the movie “Selena,” which totally blow the judges’ minds. Jennifer can’t believe how great his Spanish accent is. Keith brings Garrett is Golden Ticket and gives Garrett a hug.

22 year old Clark Beckham performs for the judges with his cover “A Man’s World.” Harry says that “Clark sound like a singer,” but Jennifer is concerned about his pitchy range. Keith agrees that Clark didn’t really put a lot of emotion in to his voice. Keith votes “yes,” but Harry votes “no,” and says that he doesn’t think Clark is ready for American Idol. Jennifer Lopez is the tie-breaker and after careful consideration she decides to vote “yes” and give Clark a Golden Ticket to Hollywood.

Illinois native Gina heads in to the audition room with her own cahone, a drum that she sits on and sings “Put The Gun Down” for the American Idol judges. Keith jokes, “who needs a band?” The judges are unanimous, Keith, Harry, and Jennifer don’t even need to vote – they give Gina a Golden Ticket to Hollywood.

24 year old Cody Fry is currently a touring musician – but wants to be the next American Idol. Cody performs a cover of “Somewhere Over The Rainbow” for the American Idol judges. Harry raves that Cody’s song “felt great” and he thinks that the people will really embrace his old-school style. Jennifer Lopez is on the fence, but Keith and Harry both vote “yes” without question, so Cody is going to Hollywood.

Hairstylist Hector Montenegro auditions in front of the American Idol judges next, Harry says that he “has a very nice voice but there is a piece missing in his presentation.” Jennifer agrees that his voice is great. Keith chimes in that Hector is a “great singer.” The judges all vote “yes” and give Hector a Golden Ticket to Hollywood.

Up next is Sayvion Wright, a familiar face, he appeared on American Idol last year but was unfortunately eliminated in Hollywood and didn’t make it to the Top 20. When he walks in Jennifer raves about how much he has changed since last season, he reassures them that he is ready to go all the way this year and sings them a rendition of Eric Clapton’s song “Change The World.” Keith says there is “no way they couldn’t vote yes.” He begs for a critique – and Harry tells him to go meet with a piano instructor and learn every single chord before he heads to Hollywood and Sayvion promises he will do just that.

The American Idol judges head to Kansas City for the next round of auditions, the first contestant they see is Kansas City native Zack, who sings a cover of Burno Mars’s “Grenade.” Harry isn’t impressed though, he says that it “was a flat audition” and Zack didn’t “captivate him.” Keith agrees that Zack has a good presence about him – but his voice still needs work. Harry votes “no.” Jennifer votes “yes.” Keith is the tie-braker, Zack begs him for a chance to go to Hollywood and Keith caves and gives him a Golden Ticket.

Naomi T. is the next singer to audition in Kansas City, she hails from Portland, Oregon. She confuses the judges when she gets down on her knees and begins singing “Someone Like You.” – but they are blown away by her voice. Jennifer says she has a great voice, but some of it is so enjoyable and some of it she was “doing too much.” Keith agrees that she was using her voice more for dramatic effect than emotional effect. Harry, Keith, and Jennifer all vote “yes” and Naomi is moving on to the next round of American Idol in Hollywood.

Jameel intrigues the judges with an acoustic version of T-Pain’s “Buy You A Drank.” Keith says that Jameel’s voice may not have been there – but he sucked him in with his style. The judges are unanimous and decide to give Jameel a Golden Ticket so that they can see him again in the next round at Hollywood.

24 year old Jasmin Panela auditions for the judges next with a rendition of Beyonce’s “Listen,” after bragging to Ryan Seacrest that she is “going all the way and will win this season.” After her voice cracks – she explains that she was up practicing all night. Keith says it’s not that her voice gave out, but she was singing in the wrong key the entire song. The judges all vote “no” and send Jasmin home disappointed.

Lovey James, a dancer and aspiring pop singer, auditions next with a cover of an Arianna Grande song. The judges joke that her name “lovey” really matches her stage presence. Keith likes that she sings pop with her own twist. The judges are unanimous – they all vote “yes” and hand Lovey her ticket to Hollywood.

Jess Lamb, a 28 year old Motown gig singer from Ohio, auditions next in front of the America Idol judges and sings “Ain’t No Sunshine When She’s Gone.” Afterwards Harry raves that Jess is “adorable and the definition of creativity.” Jennifer agrees that Jess is a “real artist” and she likes the way that she plays with her voice. Harry, Keith, and Jennifer all vote “yes,” Jess is going to Hollywood! After getting her Golden Ticket Jess is floored when she gets to jam on the piano with Harry Connick Jr.