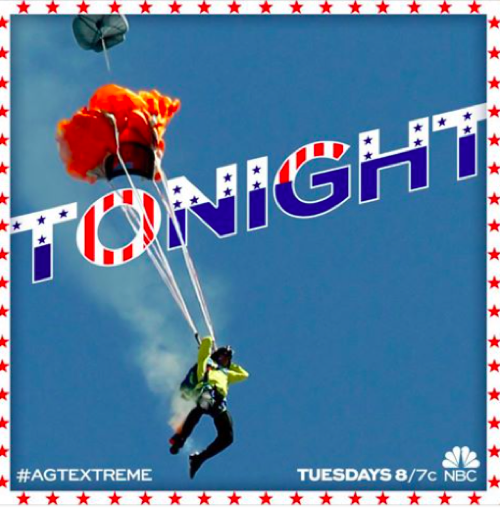 Tonight on NBC America’s Got Talent returns with an all new Tuesday June 16, Season 10 episode 4 called “AGT Extreme Audition 4”. We’ve got your recap down below! On tonight’s episode extreme acts are featured in auditions outside the theater.

On the last episode, auditions continued in the 10th anniversary season of “America’s Got Talent.” Did you watch the episode? If you missed it, we have a full and detailed recap right here for you.

On tonight’s episode per say the NBC synopsis “Celebrity judges Howie Mandel, Mel B, Heidi Klum and Howard Stern take auditions outside the theater to judge acts that are bigger, more dangerous and more extreme than ever before.”

Tonight on #AGT10 we start with The Squad, a group of 11 guys. They are a dance troupe that does very acrobatic stuff. It’s really cool and very hip. They get four solid yesses from the judges and they’ll move to the next round. The next act is a hula hooper named Marawa. She has a degree in Circus Arts. At one point, she set one on fire and then has a ton going when she dives into a split. It was crazy. She got four thumbs up and will also move on.

Then there’s a singer who does a rap mix. She and her band were amazing and move on. Then Christ and Princess do modern dance that’s very romantic and bendy. Howie and Howard make a crack about them doing a sexy dance and they do some awkward grinding on each other. Nick says there’s a lot of love on the show. Daniella, is next. She’s a Colombian girl who had open heart surgery as a baby who struggled with her health and learned to sing as a result.

Daniella takes the stage and chats with the judges. She does an opera number flawlessly. She gets her four yesses and Howie says it was perfection. She calls her mom to give the news and she goes nuts. Magician Aiden Sinclair from Wyoming is next. He talks about how he learned magic in jail. He does an amazing card trick that involved Howie and a phone call to Howard Stern’s mother. Howard says his mom was the worst part of the trick. They are impressed. He gets four yesses to move on.

Uzeyer is next – he’s a 39 year old guy from Vegas who is a circus-type performer. His inspiration is Charlie Chaplin and will do a silent movie performance. He does the famous Chaplin ladder shindig and does it well. At one point he’s on just his hands at the top of the ladder. It’s incredible. Everyone is on their feet cheering. Howie says he’s a blend of Chaplin and Mr Bean. They vote yes and he’ll move on to the next round.

Next up is Hannah who is new to America. She will sing while doing ballet. She does God Bless America and the dancing looks very nice. But the singing is very Yoko Ono and is very bad. Heidi gives her the red button fast followed by Mel B. It was bizarre to watch and painful to listen to. The judges are nice to her, but the performance was bad. Howard points out he’s the only judge born in America that could run for President. Howie says yes, Mel B no, Heidi gives a no and Howard a yes.

Howard calls Mel and Heidi anti-American and says she didn’t make it through. Nick dances the woman off the stage. The second hour of the show is all extreme acts and the judges and crowd have been moved to an outdoor arena area.

First up is Metal Mulisha, a dirtbike stunt crew. They say their inspiration was Crusty Demons of Dirt, a reality series of bikers. They do freestyle motocross and talk about how dangerous it is. Howard asks if any of them have been injured. He tells Howard to name a bone and he says femur – the guy says he broke it in four places. They also say they’ve lost four friends to the sport. Howard asks if any of them considered not doing this for safety sake. They tell him the kiss of death is their most dangerous stunt.

They crank the bikes up and do some incredible stunts. The judges love it. Howard says that was the most excited he’s ever been after four years on the show. He says they’re spectacular. They all vote yes and Howie says they scared the heck out of him. The next act is 16 year old Damone Rippy. The girls scream at the cute young guy. He’s going to flyboard. It’s a water jetback attached to your feet. The device lets him float about 40 feet in the air.

He does a total body flip and then flies like a super hero. It’s one of the coolest things I’ve ever seen. He does a dolphin type dive under and back out of the water. Howie says he wants to do it. The crowd loves it. Howard tells him it was exciting and says he looked like Iron Man. He says it made him jealous and calls the device futuristic. Heidi says it’s new and like he was a kite on a string. Mel B says she wants to try it and he’s cute. Howie raves too. They got four yesses.

Next is base jumper Cliff Ryder who’s going to jump out of a helicopter from 3,000 feet. He’ll be coming down at 120 miles per hour. He does 360 degree flips on the way down. He waits until very late to open his parachute. He does a perfect running landing and comes down to high five the judges. It’s interesting for #AGTExtreme but it’s meh for me. Lots of other people do that, right? Howie talks about how he loved Evil Knievel as a kid. They all four vote yes so he will move on.

The next guy is a jet ski acrobat. He does flips and rolls. The judges seem to like it and he moves on. Next is an older guy in a truck with Nick Cannon riding shotgun. He puts the car on two wheels while his son balances on the outside of it. The auto stunts were cool. Then we see some basketball stunt guys and one talks about how he broke his neck. They bounce, flip then slam basketballs using a trampoline. Howard says he’s never seen that before and they also get four yesses.

Howie says the most extreme thing he’s done is check into a hotel where room service ends at 10 pm. The next guy is Wally Glenn who calls himself PyroBoy and he does an act with fireworks. He has them strapped all over his body. He says his parents and people he works with don’t know he does this. Howard says it sounds nuts then acts if women get excited by this. Wally says they find it hot. He comes back in his suit as Howard calls him a lunatic.

Heidi worries that one of the firecrackers will come at them and Nick walks far away to be safe. He twirls and turns while firecrackers go off. Howie is looking for the x button but doesn’t have one on the outdoors stage. Heidi ends up hiding behind Howard by the time it’s done. The crowd is cheering even though it was totally stupid. He’s still smoking and Howie tells him to go back. Howard says he’s legally insane. Howard gives him a yes for making him laugh.

Howie says no and tells him he should watch fireworks not wear them. The crowd boos Howie. Mel B says it’s pretty and sparkly but confusing. Howard tells them they need a superhero like Pyro Boy rescuing women in distress. Howard starts a chant for Pyro Boy. He talks Mel B into a yes. It’s down to Heidi. He pressures Heidi to vote for him and stirs the crowd up. Howard goes down to hug him and they chant Put Him Through! Heidi shushes them and gives him a yes.

The next act is a bus stunt by Dr Danger and the Daredevil All Stars. Dr Danger says he’s never been the same since he saw Evil Knievel at age 10. Nick says not to try this at home. The crew takes the stage before their stunt. They range in age from 26 up to 53. He says it’s a stunt that’s never been done and Howie jokes that he thought they were a dance crew. One guy has a fake leg and arm from being run over by a train.

They go through a safety run through with the firefighters and Howie says that many firefighters being there is scary. The gang loads up into the bus. The bus is going to go up a ramp and crash into two full sized school buses that are positioned side by size vertically. The bus speeds around the track then heads for the ramp. They crash into the buses which go flying backwards. They all seem to be fine except the door is jammed shut.

The paramedics move in to cut them out of the bus. The judges greet them and are happy to see they survived. Howie says the fact that they walked out is amazing. Howard does a crazy little speech and gives them a “big stupid yes.” Heidi says she can’t wait to see what they do next. Mel B says yeah. Howie gives them their fourth yes. Howard walks out with the crew happy to be part of the team. That’s the end of the episode.