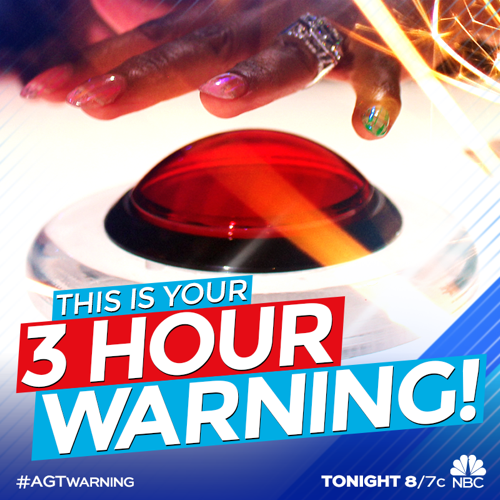 Tonight on NBC America’s Got Talent returns with an all new Tuesday June 9, Season 10 episode 3 called “Audition 3”. We’ve got your recap and spoilers down below! On tonight’s episode season 10 of auditions continue.

On the last episode, auditions continued in the 10th anniversary season of “America’s Got Talent.” Did you watch the episode? If you missed it, we have a full and detailed recap right here for you.

On tonight’s episode per say the NBC synopsis “auditions continue and more acts are put to the test.”

#AGT starts with a dance group that does video mapping called Freelusion. The dancer is surrounded by all sort of cool video effects. Another dancer springs to the stage seemingly out of nowhere. The crowd is on their feet cheering by the end. Howard says they’re strong, graceful and have a beautiful presentation. Howie says they moved him. Heidi says they’re so positive. They get four yesses.

The next act is a ventriloquist Paul Zerdin. He’s quite accomplished and the crowd loves him. He’s very funny. All four judges and the crowd are on their feet by the end of his act. Howie says he seems like a nice guy and he wants to be his friend. The other three judges all praise him and then he gets a round of four yes votes from all of the judges. He tells Nick it was fantastic.

Next is 96 year old Tao and her 26 year old dance instructor Bart. They’ve been dancing together for six years. It changes from a classical dance to Pitbull and they get totally jiggy. She spanks his bootie and it’s just adorable. The judges are all laughing and the crowd eats it up. Everyone is on their feet by the end. #YoungAtHeart. Howard says he loves it and it’s mind blowing and an inspiration.

Howie will be 60 this year and says that means his dance partner hasn’t been born yet. Mel B says it was amazing and Bart says she’s had three hip replacements. Tao says she lets nothing get the better of her. Heidi says she thinks Tao stole her glittery dress from her dressing room. Howard says he loved it and says yes, Howie, Mel B and Heidi also offer up a yes and they move on!

13 year old Alondra Santos is a mariachi singer. Her voice is strong and gorgeous. Heidi and Howie are on their feet and the crowd is as well. Alondra is near tears at the response she gets. Howie says it was amazing. Heidi says she’s a powerhouse that can belt it out. Howard says he’s not in love with mariachi music, but loves her story. Howie votes yes, then a yes from Mel B, Heidi and Howard.

Ellen and Terry are a singing duo from Oklahoma called The Orchids. They met at karaoke. OMG they are truly awful. Heidi, Mel B and Howie give them the red x but Howard laughs awhile before sending them packing. They sang Girls Just Want to Have Fun but Howard says they’re making him miserable then says it reminded him of the Spice Girls Movie. They get four firms no’s.

Nick comes out and says they need to sing some more and he dances around with them and tells them to sing some more. He sings along and boogies with them. He gets the audience clapping and standing up. Nick ushers them offstage still singing. Aww. That was really sweet and I’m sure it gave them a thrill. Howie says sometimes you have to stop and smell The Orchids.

Next up is a bearded man named Scott all decked out in a pretty pink dress. He’s from Lexington, KY and says he’s going to do comedy. Mel B asks if he always dresses up and he says he dresses like this at home. He’s a pizza delivery boy. Mel B says she likes him and can’t wait. He gets lots of laughs and the crowd is on their feet cheering for him. Mel B says she thoroughly enjoyed it and says he’s fabulous.

Howie says he’s great and Scott flirts with him. Heidi says he’s funny and fabulous and she says it’s the first time she’s truly loved a comedian on this stage. Howard says he’s one of a kind and the full package (no pun intended). He gets a yes from Howie, Heidi says yes and she can’t wait to see what he’s wearing. Howard says yes and to never shave and Mel B also offers a yes.

26 year old Michael John is next and he’s a magician. He calls Mel B up on stage and does a great card trick and another incredible feat. Mel B checked him out and touched his muscles. Howard says it was really good and like nothing they have seen. Howie says he has a nice personality and the act was great. Howard votes yes, then Heidi, Howie and Mel B also give a yes so he’s moving on!

Michael cries when he hears the votes and the audience is on their feet for him. Michael says he dreamed about this for so long and it’s finally coming true. We see an all-female dance troupe called Risque that gets just a moment of show time but picks up four votes to advance to the next stage. Next is a duo of dancers that tap like Lords of the Dance. They also get to move forward.

Next is the Ken Project, a group of hot guys who dance with their shirts open looking all sexy and fine. They also get to move on. Next up is a young maned Waheem from Algeria who drives a cab. He does some silly awkward dancing and Mel B and Nick both say he dances like Howie. Mel B tells Howie to dance too. Howard gives him the reject buzzer. Nick comes out and says it’s just like Howie.

Nick wants Howie on stage so they can all dance. He heads up to the stage. Nick says to hit the music. Howie dances horribly with him and then Nick dances him off the stage. The LA Children’s Orchestra takes the stage with director Susan. They do Eleanor Rigby and move around as they play. It’s really cool. Then some of the kids work in some serious dance moves. Mel B is on her feet by the end.

The audience cheers and shows love. Heidi says Susan says she should be proud and the kids too. Howard says he loves that they know the Beatles. Mel B says they made her smile because they looked like they were enjoying it. Howie talks to a little kid and laughs because he’s too cute. All of the judges give them a yes and the entire big group is moving on.

Next is Chicago’s Ultimate Tumblers, a neat gymnastic troupe. Howie says it was scary and fantastic. Heidi says she wants more and votes yes. Howard and Mel B give it a yes. Next up is Pitch Slapped, an a capella group that sends the crowd into a furor. Howard loves them too and they get a yes from all four judges.

Rhythmic Circus is next and they are a dancing band that does a bluesy type of thing with tap dancers out front. It’s very different. Mel B says she liked and says it’s a definite yes. Heidi, Howie and Howard also vote them through.

Leroy Patterson, pain junkie, is the next act. He says he has a pain tolerance and seems to do idiot stunts for fun. He heads out to the stage. He takes off his shirt and he’s a big blobby guy. Heidi is grossed out. He’s got 5,000 thumb tacks in two jugs and pours them on the floor. He falls back into them violently. Then he does a belly flop onto them. Heidi gives him the reject buzzer.

Then he bashes his head into them over and over. Nick screams that you should never try it at home. Howard says some guys in white coats are coming for him. He’s bleeding and Heidi says she doesn’t like it one bit. Howard says he doesn’t know what to think. Mel B says she likes it and votes yes and so does Howie. Heidi says no and Howard says he was laughing so it’s a yes and he’s through as well.

The judges tease Howie about his fat belly. Mel B says it’s offensive but Heidi likes it. Next are two Vladimirs who are acrobats from the Ukraine and they call themselves Duo Vladimir. They do hand balancing, acrobatics and knives. Howard is excited. They start with some really tricky maneuvers. Then they move on to the knives.

They each put a knife in their mouth then end up balancing just on the knife points in their mouths. All of the judges are on their feet and so is the crowd. Howard says he loved it and says it was magnificent. Heidi says she loved it and is excited to have them on the show. Mel B says she’s glad it went well. They get four yesses across the board to move on. Howard calls it a home run.

Next up is 29 year old Sharon Irving who is a singer. She says she left her job to pursue music full time and has been hustling since then. She does Hozier’s Take Me to Church. She kills it and the crowd is on their feet cheering within moments. The judges are all on their feet clapping for Sharon and she tears up. Heidi says she has a special gift and an amazing voice.

Howard says he doesn’t get off his chair for much but she was great. He says he got the chills and she’s fantastic. Howie says as human beings, some people have a gift to move hearts and says Sharon did that. Sharon talks about her grandmother who encouraged her and has now passed on. Mel B says she feels like she’s embracing her voice. Mel B slaps the #GoldenBuzzer then runs up to hug her. That means Sharon goes straight through to the live shows.