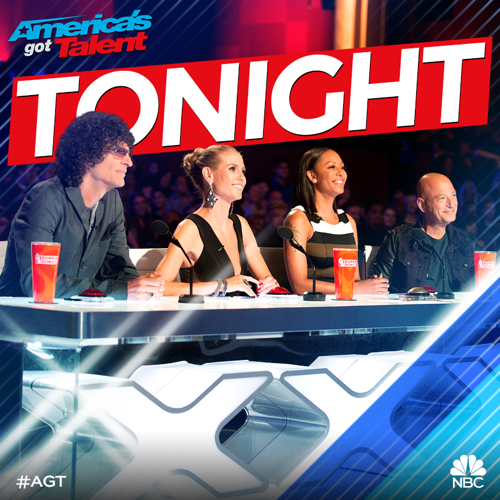 Tonight on NBC America’s Got Talent returns with an all new Tuesday June 2, Season 10 episode 2 called “Audition 2”. We have your weekly recap down below! On tonight’s episode season 10 of auditions continue.

On the last episode, the summer’s hottest reality competition show, “America’s Got Talent,” returned for its 10th anniversary season starring judges Howard Stern, Heidi Klum, Mel B and Howie Mandel, and hosted by Nick Cannon. In the 10th season premiere, variety acts of all types and contestants of all ages auditioned for the chance to win the $1 million prize. This season, the Golden Buzzer allows four lucky acts the chance to go directly to the live performance rounds at Radio City Music Hall to compete for America’s vote. Did you watch the episode? If you missed it, we have a full and detailed recap right here for you.

On tonight’s episode per say the NBC synopsis “auditions continue in the 10th anniversary season of “America’s Got Talent.” Starring judges Howard Stern, Heidi Klum, Mel B and Howie Mandel, and hosted by Nick Cannon, variety acts of all types and contestants of all ages audition for the chance to win the $1 million prize. This season, the Golden Buzzer allows four lucky acts the chance to go directly to the live performance rounds at Radio City Music Hall to compete for America’s vote.”

First on #AGT10 is a hip hop group called DM Nation. They are cool – they move so fast and do these strong lifts that it’s incredible. The crowd is on their feet cheering. Howie says he’s hard on dance crews but says this is something they haven’t seen before. Heidi says one of the best dance groups she’s seen in a long time. Howard says they’re fun and fantastic. Mel B says they’re off the chain.

Next is mentalist Wayne Hoffman. He does a crazy stunt with live firecrackers where he has to pick how Howie lined them up. It was nuts. Howard says this was exciting and he likes it. Heidi says she was constantly entertained. Mel B says it was dangerous and brilliant. Howie says he was really scared and is relieved he’s still there. Howie votes yes, Heidi sys yes, Howard says yes and he’s through.

Now we see a singing duo from Atlanta called the CraigLewis Band. They do a James Brown cover and their voices are both great. Howie says they deserve a million dollar buffet. Heidi says she loved it and they’ll go far. Howard says great song, great audition and they owned the stage. Mel B says they have very powerful different voice and were on point. They get four yesses and are moving on!

Stevie Starr is next and he’s a professional regurgitator from Scotland. He swallows four coins and hocks them back up in order then does sugar too. It’s disturbing yet amazing. Mel B says it was unbelievable and she would go see that show. Howie says everyone wants more of this. Heidi says he’s her favorite act so far. Howard says he could be a real sensation. He gets four yesses and moves on!

Ronnie from Vancouver is next and he’s a dancer famous in the clubs up in Canada. He dances to I’ve Got the Power. Mel B hits him with a veto almost immediately. Then the other three veto him rapidly just as Ronnie drops down into a split. He changes that to a two finger push up. Howard says he likes the outfit and the push-up. Mel B says it didn’t go well but he seemed to enjoy himself. It’s all no’s.

Benjamin is the next act – he’s a blind dancer. He uses Google Glass to make out shapes. His dancing is great and even more amazing being that he can’t see much. The crowd loves him and are on their feet. Mel B says he’s unstoppable and his dancing is beautiful. Howie says he loves that he’s there. Heidi says it’s amazing. Howard says he inspired him. It’s yes across the board for Benjamin.

We see Howard giving Nick a hard time about dating and trying to fix him up with the ladies. Shirley Claire is there, she’s 87 and from Texas. She was a showgirl back in golden Hollywood. She talks about all the gifts she got from rich and famous men. She flirts with Nick backstage then heads out. She sings this great song about living til she dies and being a devil til she’s an angel. It was pretty impressive.

The crowd loves her – they are on their feet as are the judges. Mel B says she’s got glamor and style and her personality filled up the whole room. Howie says she’s so witty and quick and adorable. Heidi says she’s excited that she’s there and says she’s an inspiration and is in love with her. Howard calls for a vote and they all say yes! Shirley is through to the next round. She kisses Nick on the lips and he says it made his day.

The next group are the Treadmill Dance Crew. It’s a big group who dances on treadmills and it’s pretty cool. Howie loved it. He wonders what they could do with a Stairmaster. They get a yes. Next is a group of skaters called On a Roll Skate Crew. It’s like hip hop on wheels and is bizarre and interesting. Mel B loved the choreography and they also get a yes to the next stage.

Xakary the magician is up next and he plans to cut Heidi in half. He calls Heidi up to be his assistant. Heidi asks him to use Nick instead. She looks scared and the audience chants her name. She says goodbye to her children. He cuts her in half and tilts the box up. He helps her out and the crowd cheers with glee. Howard says it was remarkable. Howie says it was visually amazing. Mel B says she loved it. Xakary gets four yes votes.

Alicia Michilli tries out next and talks about being the black sheep of her family. She’s a singer. She does an Etta James song and it’s great. Mel B says it wasn’t pitch perfect but she could feel her soul. Heidi loves it. Howie says it wasn’t perfect but soul isn’t about perfection. She gets four yesses and moves on.

After a montage of insanity, a guy named Youngblood comes out. He drinks milk through his nose then spits it out of his eyeball. It’s disgusting and they can’t help but watch. He squirts a little onto the crowd. Howie thinks it’s fantastic. Howard says in four years of judging this is the closest he’s come to throwing up. Heidi also hit x and calls it a hot mess. She says it’s more of a party trick.

Mel B says she felt sick to her stomach but when you raise emotions like that it’s saying something in a sick way. Howie agrees. Howie asks how far he can squirt out of his eyes and he says seven feet. Howie says he should do target practice or squirt into someone else’s mouth. Mel B and Howie say yes. Heidi sticks with no and Howard says for the sake of AGT it has to be a no.

Derek Hughes is next and he’s a magician. He does the best card trick ever. He made a card appear in his crack! It’s a #ButtCard. Mel B says he’s funny and dirty and she liked it. Howie tells Mel B to go up and check the card. She laughs. Heidi says it was awesome. Howard says he’s unforgettable. He getes four yesses and he’s through to the next round.

Next is a dance duo called Freckled Sky. They use light, water and dance. It’s a neat and different sort of technology dance than they’ve had before. It was amazing. The crowd is on its feet going wild and the judges are on their feet too. Howard says it was spectacular. They bring out Val their director who put it all together. Val says it was a dream to create something special.

Howard says he’s going to do something special. He asks if he knows what the golden button means and he slaps it – that sends Freckled Sky straight to the live shows. They get confetti and are thrilled. Howard says that’s the way to have an audition and he loves them. Heidi says she was going to hit the gold buzzer herself. Mel B says they deserve it and it was well done. Howie says they can win it.