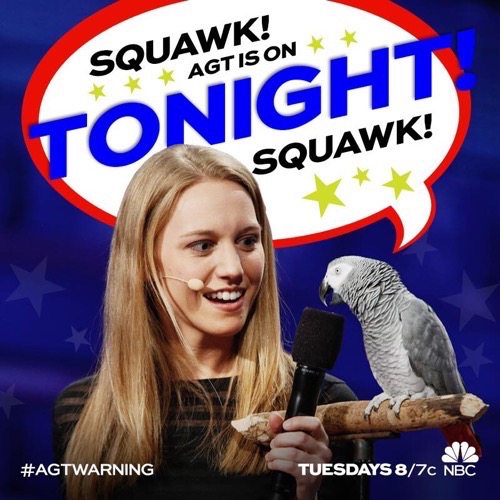 Tonight on NBC America’s Got Talent returns with an all new Tuesday June 23, Season 10 episode 5 called “Audition 5”, and we have your weekly recap below.  On tonight’s episode host Nick Cannon and the judges continue heir nationwide quest to find season 10’s million-dollar act.

On the last episode, celebrity judges Howie Mandel, Mel B, Heidi Klum and Howard Stern took auditions outside the theater to judge acts that were bigger, more dangerous and more extreme than ever before. Did you watch the episode? If you missed it, we have a full and detailed recap right here for you.

On tonight’s episode per the NBC synopsis “the auditions continue on it’s fifth week as the most extreme acts vie for the million-dollar prize.”

#AGT starts with a 9 and 12-year-old brother dancing act called The Gentlemen. The crowd is on their feet for them the moment Zack and Cameron take the stage. They dance quite well and their act is very impressive. Even the judges are on their feet by the time the boys are done. Mel B says it’s crazy they dance that well at their ages and says she loves them. Howie raves and says their moves are smooth. Heidi says they dance better than many adults they see on the stage. Howard says they’re terrific. They get a yes from all four judges.

Next up is mentalist and mind reader Oz Perlman. He goes to Heidi and tells her to think of a number then asks Howie if he knows what number she will pick. Oz wrote down the number she had guessed. Then he asks Mel to think of a place she’s traveled to personally. She wrote Fiji and Geri and Oz pulls a stapled shut envelope out of his pocket and sure enough it contained that information. Howard says it was beautifully executed and said he included the audience nicely. Mel B says she would watch him. Heidi asks if he knows what she’s thinking and he says it’s a family show. They all vote yes.

24-year-old Brittney Alan is a singer and she’s nervous before going on stage. She’s from a tiny town in Alabama. She’s never sung in front of anyone else due to her paralyzing stage fright. She plays the piano and sings but then she messes up her piano playing and stops. They tell her to start again and the crowd cheers. Howie tells her to relax and do it again. She sings beautifully. Mel B goes to hug the crying girl when she’s done. Howie says she’s amazing. Mel B says she’s likable and has something special. Heidi says she can do it and deserves a shot. Howard says he’s not sure. She gets three yesses.

Next up are some animal acts. A woman has a bird who’s hilarious. Then we see the ugliest dog ever named Rascal. He does a doggy strip show but gets buzzed off the stage by all four judges. Next is a woman with a tortoise named Tessa. It’s supposed to go around cones but the thing won’t move, the crowd boos and she gets buzzed out. Howie jokes she needs to come out of her shell. Birdie Sue does bird whistles. She does bird whistles to an instrumental version of Don’t Worry Be Happy then she tap dances a little. The #BirdLady scores cheers from the audience but it’s weird.

Mel B says what she does is odd and Heidi says it’s not really for American’s Got Talent. Howard says she’s just on the edge of being bad but it’s so bad it’s good. She gets four no votes and the crowd boos the judges for booting her. Later the judges try to do bird whistles for themselves and fail. Next is a guy who grosses out the crowd shoving a balloon through another guys nostril and out his mouth. He makes a balloon animal outside his nose. Heidi says she was so grossed out she forgot to buzz then buzzes. Howard gives them a yes and so does Mel B and Howie because they want to see more.

Next is a Latin dance group from San Antonio called Semeneya. One of the men hurts his foot and has to leave the stage. He takes a seat and Nick says someone got hurt. He says his kneecap snapped and they call the medic. Nick comes over to check on Luis. Howie goes over to check on him and they see his kneecap has completely popped out. They have to splint him up and take him to the hospital. Heidi asks if they can let the other three have another audition slot tomorrow to dance with just the three of them. Two of the dancers decide to change to a duo on the spot.

They do a crazy number where he leaps just over her head then grabs her by the neck and shakes her head back and forth likes he’s going to snap her neck. The crowd loves it and is on their feet cheering. Mel B says that was professional at its best with them to deliver a killer performance after what happened. Mel B and Howie vote a loud yes followed by the other two judges. So, despite the injury. Semeneya will move on and Howard calls out that they hope their friend is okay. Evoke Tap Movement is next – it’s a large troupe that wants to bring tap back. It’s very cool. The innovative act gets yesses too.

Animation Crew is another dance group and they are really interesting and different – they almost look like dancing zombies. Mel B says it’s like watching a piece of art come to life. They also get four thumbs up and move on to the next round. Next is Metalachi, a metal mariachi band. They do “We’re Not Going to Take It” as a mariachi number. It was pretty cool and the judges love it. The quirky singing group gets four yes votes.

Next we see some kid acts. Nick comes out to do a dance off with a kid. We see a unicycle acrobat act, a dancer, then Arielle Baril, an 11-year-old singing sensation. She sings opera and it’s amazing. Heidi and the crowd are on their feet. Heidi says she sounds so grown up she thought she was lip syncing over playback. Mel B says she has a huge voice. Howard says she moved them and says it’s freaky how mature her voice is in the best way. Howie says she has an amazing talent and he wants to see more. Heidi says she loves and will send her to Radio City Music hall and presses the golden buzzer.

Next we see some senior acts, including Crazy George, a professional cheerleader. He gets buzzed out. Next is the Lakettes from a tiny town in Colorado. They are a strange dance group. Next is the Power Lifting Granny named Sandra. She lifts 185 pounds but doesn’t move on because it’s not an act right for AGT. Shell comes out next and he’s a danger stunt man and grandpa. He calls his act The Grandpa Show. He has a chainsaw in hand. He cranks up his chain saw and then does a hand stand over it. Then he puts on a blindfold and puts an apple in his mouth. He cuts the apple in half!

The crowd loves it and Nick comes out and says he almost cut his nose off. Howard says it was either the stupidest or most brilliant thing he’s seen. Heidi says he took it a little too far. Mel B says she didn’t feel the danger. They vote. Howie, Heidi, and Howard say yes but Mel B gives him a no. Howard said he’s intrigued and wants to see what’s next. Heidi says she was worried and doesn’t want him hurt. Heidi caves to crowd and peer pressure to vote him through. She tells him he better be really careful the next time he comes.

The next act is Alexi from the Ukraine. He has a mannequin he does his act with and he admits his wife is jealous because he spends a lot of time with this other woman in the gym and the garage. Alexi pulls off his shirt and the ladies cheer. He does a balancing act to Berlin’s “Take My Breath Away” on the mannequin. It’s very impressive and not something he could do on a real woman. It’s very lyrical and pretty sexy since he’s dripping muscles and very flexible. Mel B’s mouth hangs open as she watches. The crowd is on their feet cheering as he finishes.

Howard says it was really strange and Heidi says strange but good and Howard agrees. He says it’s hard to take the art of hand balancing and put a new spin on it. Howard says he sees why his wife is jealous of her. Heidi says he’s an amazing athlete. She says it’s weird him climbing on the doll in the positions. Mel B says she likes his strength and says it was seamless and says she kind of gets it. Howie says he imagines people in his neighborhood watching him come out of the garage sweaty and the mannequin with no head. He gets the yes votes he needs to move on. Howard says it was weird and he loves it.

Alex Boye and his band are next. They do pop music with an African twist. They do Taylor Swift’s “Shake It Off.” It’s funky and cool. The crowd eats it up. He jumps off the stage into a split at the end and brings Howie and Heidi to their feet. Mel B says it woke everyone up. She says his energy filled up the room and says it was brilliant. Heidi says he rocked it out and it was contagious. She says it’s awesome. Howard says they’re terrific and he could watch all day and loved his split. Howie says his soul is in what he does and they vote to send them on. Alex is crying over their praise.

The next act are two juggles. It’s a younger and older guy; one’s an Ethiopian and the other a redneck. Syum and Danny are taxi drivers who juggle. Howard says it looks like Daniel took the other guy hostage. Howie, Howard, and Heidi slap their no buzzers but Mel B is digging it. Howard says it’s like they didn’t know what the other was doing. Howard asks Mel B why she didn’t hit her buzzer and she says she loves that song. Heidi says it was a hot mess. Howie says it’s a no with love and Mel B gives a yes for song choice. Heidi says no and Howard says they’re finished.