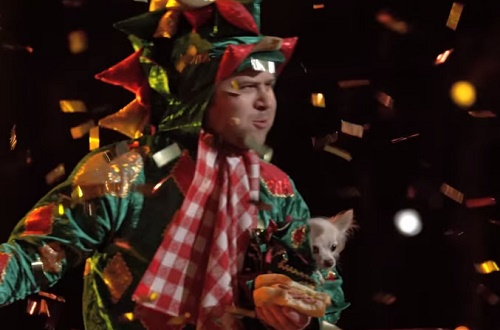 America’s Got Talent season 10 is proving to be the most popular installment thus far. Guest judges, magic dragons, Howard Stern’s hair, Heidi Klum; it’s all scrunched together like Sicilian mourners on a bullet train in Hong Kong. But it’s the eccentric and talented contestant-smorgasbord that makes this season the season to end all seasons.

SPOILER ALERT: Piff the Magic Dragon, otherwise known as John van der Put, is one of the youngest magicians ever to lecture at the famous Magic Circle. According to Piff’s official website, “With over 12 million YouTube hits to his name Piff has performed to hundreds of thousands of people in preposterous venues such as Radio City Music Hall, the O2, London, and Sydney Opera House. His sidekick Mr Piffles, The World’s First Magic Performing Chihuahua has been levitated, laminated, shackled in a straitjacket and shot out of a cannon all in the name of entertainment. Just one thing: They don’t do Children’s Parties.”

Magic, princesses and snacks. Not necessarily in that order.

Who is the man behind Piff the Magic Dragon?

Why did you decide to audition for America’s Got Talent?

No one in America knew who I was, and AGT can change that.

Do you think America has more talent than Britain? If so, why?

Well… it certainly has more people…

You’re an extremely funny guy. What is the funniest thing that has ever happened to you?

Are the auditions as stressful as they appear to be? If so, why?

Yes. It can be very difficult to gain consistent access to pizza.

Tell us the story of your life in 50-words or less.

Born a magic dragon. Did magic. Needed a gimmick. Got a magic performing Chihuahua. Moved to Vegas. Did AGT. Kissed Heidi Klum.

The judges were very impressed with your audition(s). Which judge was the most intimidating?

Howard Stern at first. But he seemed to like it.

Why did you pick Heidi Klum for the one-on-one stage interaction?

Errrr hello? She is super-hot.

What went through your mind when Neil Patrick Harris used his Golden Buzzer on you?

I was too shocked to think. I think I must have been overcome by a temporary madness as I gave away my sandwich. It was a delicious sandwich. I miss that sandwich.

What goes on behind the scenes?

Why should you win America’s Got Talent?

How will winning the show change your life?

I will finally be more famous than my older brother.

Who is your favorite magician?

Who is your favourite comedian?

Where does Piff the Magic Dragon come from?

What is your favourite magic trick?

What does the future hold for Piff the Magic Dragon?

I would love to have my own show in Las Vegas. And then if that goes well, open PiffLand

You can read more about John here.

You can visit Piff the Magic Dragon here.

Can’t get enough of America’s Got Talent? We can’t either! Stay tuned to Celeb Dirty Laundry for all the latest AGT news, reviews and interviews.