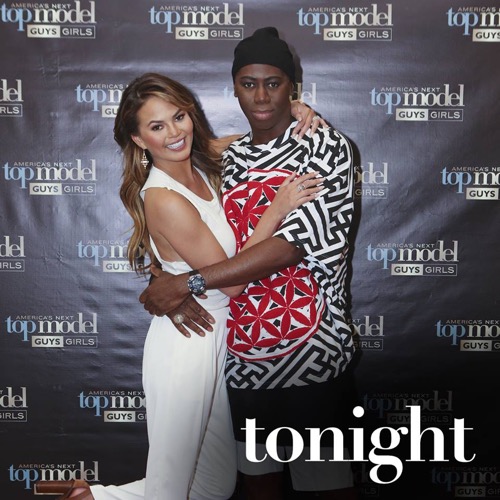 Tonight on CW Tyra Bank’s America’s Next Top Model (ANTM) continues with an all new Friday November 13, cycle 22 episode 14 called, “The Guy Who Was a Momma’s Boy” and we have your weekly recap below.  On tonight’s episode Tyra’s mom is the photographer for a special photo shoot with the final four models and their mothers.

On the last episode the models had to create and pitch a business idea; the models posed in the cold, dark woods for a photo shoot. Did you watch the last episode? If you missed it we have you covered with a full and detailed recap right here for you.

On tonight’s episode as per the CW synopsis, “Tyra’s mom is the photographer for a special photo shoot with the final four models and their mothers. The contestants also shoot a mock cover of Nylon magazine and meet supermodel Chrissy Teigen, who gives them tips on making it in the modeling industry.”

Well, Chrissy Teigen stopped by the house on tonight’s episode of “America’s Next Top Model”. And it turns out she was Mikey prize for being the challenge winner last week.

Chrissy had gone to the house in order fill in Mikey about the modelling world. Apparently it’s a constant battle to get picked and not even a Sports Illustrated cover meant Chrissy had to stop going on go-sees. So Mikey was told about the angles he had to work and how much harder it was for male models to break onto the scene.

But Mikey being Mikey, he didn’t let their conversation be completed dominated by doom and gloom. He did after all manage to get in some flirting before he remembered Chrissy was married to John Legend. So all in all it was a good talk for Mikey.

He likes to play it off sometimes that this competition won’t make or break him but then later on the challenge he got real with Yu Tsai. As it turns out the contestants had to create a mock cover for Nylon Magazine and it had to showcase their personal style. So Mikey did end up bringing the chill surfer look but he also spoke about where he came from.

Not many guys from his old neighborhood had graduated high school much less stayed out of prison. Yet Mikey did all of that and he hopes to achieve more. So Yu Tsai to him that was the Mikey he wanted to see everytime on set.

For Mikey did go on to take a pretty damn good picture. However the girls struggled the most with the challenge. Lacey went back to her signature look and the people behind the camera found it repetitive. Meanwhile Mame who can pull off a great picture and show some subtle changes – was incredible stiff on set.

So besides Mikey, Nyle was the only other person to receive great feedback during the photo-shoot. And later it was Nyle that won the competition seeing as random people off the street ended up falling in love with his piercing blue eyes. No one had known it beforehand but in actuality the ladies love Nyle just a little bit more than Mikey.

Only the challenge did take some of the wind out of Mame’s sails.

Mame had the weakest scores and it made her a bit testy back at the house because she knew that she had to do particularly great at her next photo-shoot. However Tyra came up with a special idea for the next shoot and it helped put everything in perspective for the contestants.

See, they weren’t just doing another photo-shoot. They were actually going to be doing a photo-shoot with their mom. And that was one thing that everyone could loves because some of them have desperately missed their mothers.

Both Nyle and Mikey were good Mama’s boys. And Mame it seems needed her mother. Mame had been sent to the States when she was very young because at the time her parents had felt Ghana wouldn’t be safe for her. So Mame was basically raised by her aunt and uncle. Though she’s always craved a close relationship with her mom.

But ANTM was probably not the best place for them to try and find a connection.

For there was a bit of a disconnect and it later came across on camera. Mame would be focusing on herself while her mother needed someone to help bring the older woman out of her shell. And eventually Tyra had to step in to take care of Mame’s mother. So the ladies struggled through their first frame but Tyra helped through them the last.

Yet overall it was probably the best day on set for most of them.

Everyone’s mother had put their best foot forward and it was a great bunch of photos for the judges. Therefore Mame was able to recover from her earlier photo-shoot and win best photo this week. With Nyle coming in as a close second.

But out of Mikey and Lacey, social media couldn’t decide who to choose. And neither could the judges. So there was no elimination this week and it will be four contestants that will go into the finale.