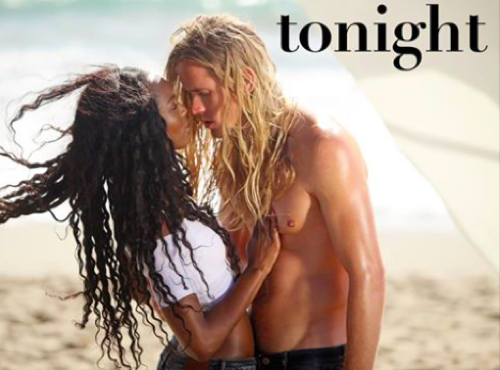 Tonight on CW Tyra Bank’s America’s Next Top Model continues with an all new Wednesday September 16, cycle 22 episode 7 called, “The Guy Who Acts a Fool” and we have your weekly recap below.  On tonight’s episode the models struggle during an acting challenge.

On the last episode the stress of the competition got to some of the models, which caused them to lose focus. At the photo shoot, the guys and girls were suspended in mid-air and made to look possessed. Did you watch the last episode? If you missed it, we have a full and detailed recap right here for you.

On tonight’s episode as per the CW synopsis, “the models struggle during an acting challenge. Later, the guys and gals are paired up for a sexy commercial at the beach, but jealousy runs rampant and some chemistry falls flat.”

The models are told they are going to be in a CW scene and they need to pick a partner.  First to pick is Nyle because Nyle won best picture  last week and he picks Lacey.  Lacey sis super excited to be with him.

Mame picks Justin because it is going to be a love scene and her and Justin are getting closer.  Hadassah chooses Bello.  Devin chooses Ashley and that leaves Mikey and Courtney.  Ashley is feeling confident going into rehearsal.  The couples have 30 minutes to rehearse.  Mame is worried she likes Justin more than he likes her.

Everyone is rehearing their acting and Bello decided to just memorize the words he thinks he is a good enough actor.  As everyone tries to work Devin plays the joker as usual and Ashley worries.  Ashley is getting nervous because Devin won’t works he thinks it will be easy for him.

The CW executives are hoping they see people who have talent.  Mame and Justin are first the executives could not see that the two were a couple in real life because of their lack of chemistry.

Hadassah and Bello and Bello is confident and then he forgets his lines and he improvises.  Hadassah was totally thrown off because Bello did not follow the script.  The executives realized that Bello had a different script than Hadassah.

Mikey and Courtney – Mikey could not connect with Courtney – the executives felt Courtney tried but they thought Mikey was caught up in his hair and one of the executives asked if Mikey had to pee because he was jumping around so much.

Nyle and Lacey – Nyle was confident because he had acted before.  The executives loved Lacey but were worried about her accent.  They thought Nyle had presence.

Devin and Ashley come in – Devin looks crazy and started laughing.  The executive did not have a positive feeling about Devin she felt he treated it like a joke.  They thought it was a freak show and not professional.  They felt Ashley took it serious but got frustrated with Devin.

The models come back in the room and the executives say they felt not all the models took the opportunity seriously.  There were two people the winner and runner up.  The winner is Lacey and the runner up is Nyle.  Lacey is really happy.

Lacey is at the top of the list with a 10 and Devin is at the bottom with a 6 and he is not pleased.  Ashley is not pleased because she got  a 6 too and she blamed Devin.

Nyle is feeling a bit isolated from everyone and finding it hard to stay motivated.

The models get a guest and it is Britney, Nyle’s best friend, they were high school lovers.  Britney teaches Kindergarten.  The models find out they are going to learn sign language.  Nyle enjoys teaching them his language.  Mikey found it helped him understand Nyle’s life.  It made everyone understand how difficult it has been for Nyle.  Britney tells Nyle how proud she is of him and told him to WIN!

The models are at Zuma Beach – Erik Asla is going to film the models for “Boom Boom deodorant” and they are going to need chemistry with the model they are paired with.

Mame/Mikey – It was so cold Mikey is shaking – J Alexander thinks Mame’s pretty gets n the way.  Tyra thinks Mame was beautiful and did a really good job.

Courtney and Bello – Bello got a bit frustrated during the commercial with Courtney. Tyra says Bello gave her chills.  J Alexander thought when Courtney did not speak it was the best.

Lacey and Devin – Tyra asks Devin what he was doing.  J Alexander says the visual was great!  Kelly tells Lacey she won the acting and she talks well on camera .  Kelly tells Devin not to do it professionally.

Nyle and Ashley – Kelly did not love them together as a couple – she found it a little between acting and modeling.  Tyra thinks Ashley was a bit too realistic.