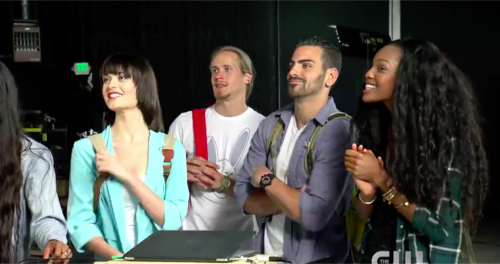 Tonight on CW Tyra Bank’s America’s Next Top Model continues with an all new Wednesday September 9, cycle 22 episode 6 called, “The Girl Who Gets Possessed” and we have your weekly recap below.  On tonight’s episode the stress of the competition gets to some of the models, which causes them to lose focus.

On tonight’s episode as per the CW synopsis, “the stress of the competition gets to some of the models, which causes them to lose focus. At the photo shoot, the guys and girls are suspended in mid-air and made to look possessed.”

Lacey won best photo last week and on tonight’s episode of “ANTM” she asked Nyle if he wanted to spend the night in the Tyra Suite with her.

Naturally he said yes because, unlike some of the other guys in the house, he hasn’t really hooked up with anyone just yet. Plus he was kind of in need of a pick me up. This last panel, as we saw, was particularly brutal for him. And he was essentially told that if he didn’t shape up then he’d be ship out.

So Nyle knows that he has to bring and bring it hard. But, later, at challenge he decided to do something which was a bit unusual for him – he decided to completely let go. As in, when he was shooting for Kelly’s own campaign for Simply Be, he just let go. He was sedative, he was funny, and Nyle clearly came out of his shell.

However, others weren’t as lucky. And Ava was one of the people that struggling to get through with the shoot after she felt the in-house drama had gotten to her.

Though, funnily enough, Courtney was just bad at the shoot but for a whole another reason. Earlier she had complained about the drama as well but it seems what really sunk her was being paired up with Devin. He simply took control and road roughshod.

So that made Kelly tell Courtney that she needs to speak up more. Especially as Season 10 winner Whitney couldn’t even remember her name afterwards. All she could recall was Devin because it’s not like anyone could forget his mouth.

At the end of the challenge, Kelly gave out a lot of critiques but the one pair that didn’t seem to disappoint her was Nyle and Justin. So it was those two that won the best scores and it was Nyle that won the entire challenge. Yet Justin had his own moment on set.

Mike and Mame had been paired together and Kelly had asked them to kiss for their shoot. So that was a tad harsh to watch. And while Ashley could stand it, Justin couldn’t.

But it all worked out. Both Justin and Mame are stronger competitors and they didn’t let a little thing like their personal relationship create a problem for them on set.

Thus they created a good policy for themselves. Though, issues at the house finally resulted in one nasty confrontation on the bus. Mame you see has always had a bit of a problem with Hadassah and tonight the two pageant queens went at.

And it got ugly.

Mame went into the bathroom because she need to pee real bad but someone else was already in there. Namely Hadassah. And Hadassah had made her feelings about her space pretty clear. She was after all the same girl who had previously demanded that no one touch her stuff.

So having someone walk in while she’s in the shower definitely made her upset. And she got loud but so did Mame. Which is why Justin of all people decided to hold a house meeting just for them.

He wanted them to settle whatever problems they have. And he was probably also sick of hearing pageant titles get thrown around. But despite what he did, in trying to bring them together, the two ladies only ended up agreeing to disagree.

Yet, when it came time to do their possession photo-shoot and the results that photo-shoot led to, well that made the rivalry thing come all back.

Hadassah wasn’t strong on set. Which is technically nothing new. However she managed to pull off a really great shot. Now Mame was just as strong so she thought she would at least get ranked higher than Hadassah.

And she did. But Hadassah went from being in the bottom two to in coming in right after her. So the rivalry is only going to get worse from here.

Meanwhile, the bottom two this week was Courtney and Ava. Ava had lost a lot of confidence recently and it’s starting to show in her photos. And as for Courtney, the judges often doubt if she’s strong enough for this competition.

She’s too skinny, she’s too emotionally fragile, and it was just too much fort the judges. So it was left up to social media scores and I gotta say I was surprised when it came back that the fans chose to keep Courtney and send Ava home.