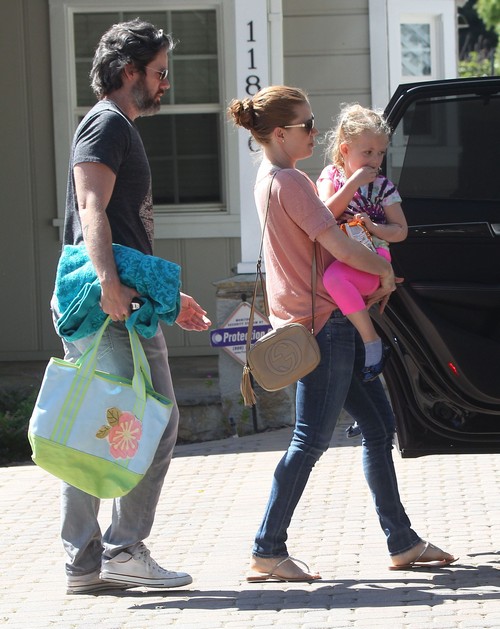 Amy Adams is so low-key that you almost forget that she’s been nominated for an Oscar five times, and you also forget that she’s had one of the steadiest romantic relationships in Hollywood. Amy Adams and her boyfriend, Darren Le Gallo, already have a young child together, but they’ve been engaged for so long that some people have automatically assumed that they’re married.

But alas, a new report from Page Six claims that Amy Adams is only now planning a secret LA wedding to Darren Le Gallo. The couple’s been together for fourteen years, have a five year old daughter, and they’ve been engaged since 2008. So yeah, it’s about freaking time.

A source tells Page Six, “Amy and Darren are getting married this weekend in Los Angeles in a wedding ceremony that will be intimate and very genuine. The guest list is being kept very small and she has kept the location very much under wraps. Amy and Darren had always planned on getting married, but her career has been on such an amazing trajectory, it has been hard for her to take the time out. But now she has deliberately taken some time off work to be with her family and finally get married.”

Well, it’s probably difficult to turn down jobs when you keep getting nominated for Oscars and are also getting offered large comic-book movies for a bajillion dollars each. But it’s commendable that Amy manages to fly under the radar so much, especially with her private life. She’s never been a tabloid darling, and that’s because there’s just no gossip or drama around her life. She’s been with the same guy for more than a decade, they have a young child together, and she puts her head down and works quietly without any drama. You’d think that level of professionalism would be common in Hollywood, but we sadly know that isn’t true.