Andi Dorfman Faked Sad Tears In The Bachelor 2015 Interview About Josh Murray Break-Up: Cheating With Nick Viall All Along? 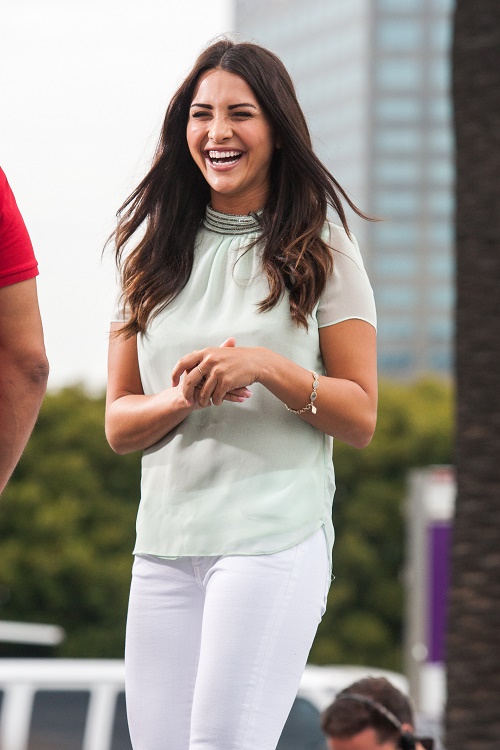 Did Andi Dorfman dump Josh Murray for Nick Viall? The 2014 Bachelorette Andi Dorfman and her fiancée, Josh Murray, attended the premiere of Chris Soules’s season of The Bachelor in January 2015 and gushed to host Chris Harrison about their upcoming wedding and how in love they were, and then two days later it was confirmed that the wedding was cancelled and they had broken up. In February, Andi attended a special episode of The Bachelor and sobbed in an interview with Chris Harrison about how heart-broken she was over her failed engagement to Josh Murray.

Did you fall for Andi Dorfman’s tears? A lot of Bachelorette fans did – and rushed to social media to offer their support. Little did we all know, Andi Dorfman was far from the devastated and heart-broken woman she portrayed during her interview. The Bachelorette had been out partying two nights before she sat down with Chris Harrison – with her ex Nick Viall!

The March 9th edition of Star Magazine reveals, “Andi claimed to be devastated that she would never set a wedding date with her No. 1 choice. But, she seemed to be anything but broken up just two days earlier when she and runner-up Nick were all over each other, drinking and dancing at the Newport Bar & Grill In Chicago.”

Now, anyone who watched the 2014 season of The Bachelorette recalls the After The Final Rose Show when Nick Viall announced on national television that Andi Dorfman had sex with him just two days before she accepted Josh Murray’s proposal – Nick’s admission sent shockwaves through Bachelorette fans. And, throughout Andi and Josh’s short engagement, rumors were constantly popping up that Andi Dorfman and Nick Viall were still seeing each other behind her fiancé Josh Murray’s back.

Travelling to Chicago to spend a romantic night with Nick Viall could just have been a heart-broken rebound for Andi. Or, what we have suspected all along is true, Andi has been cheating on Josh with Nick Viall. And that would totally explain their abrupt break-up, seeing as how two days before they announced they were splitting the couple was on the red carpet at the Bachelor premiere bragging about their upcoming wedding.

Do you think that Andi Dorfman is just a really good actress – and she faked her tears in her interview with Chris Harrison? Was she cheating on Josh all along with Nick Viall? Let us know what you think in the comments below!