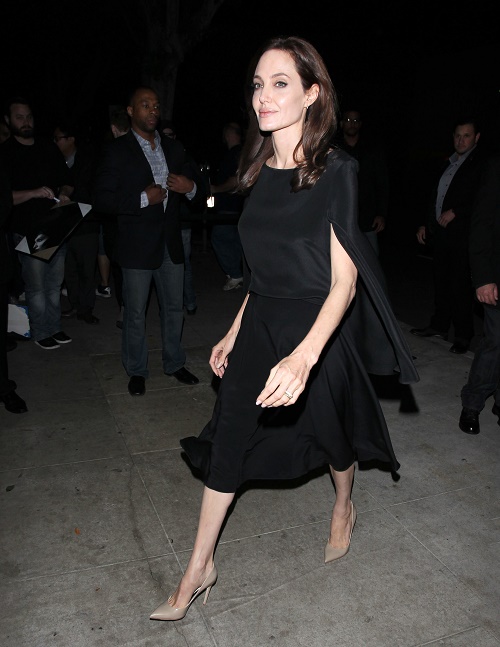 Angelina Jolie’s film, Unbroken, has received a big old snub by the 2015 Oscars — and she’s distraught! Angelina Jolie is going to have a hard time forgiving the Academy for this. Even though the Academy presented her with a special Governor’s award last year, they have completely snubbed her and her film Unbroken this year. The 2015 Oscar nominations were announced this morning, and Unbroken was passed over in all the major categories, including Best Picture, Best Actor, Best Supporting Actor, Best Director, and Best Adapted Screenplay. That’s a lot of snubs, isn’t it?

Keep in mind, most of these governing bodies used to nominate Angelina Jolie just so that she and Brad Pitt would show up and increase viewership. But either the Academy has become more selective about the quality of their films, or they just don’t want to pander to Angelina Jolie anymore. Either option presents an insult to Angelina Jolie, just in varying degrees of indignity.

Now, Unbroken wasn’t a poor quality film, but it definitely didn’t stack up to several of the other frontrunners this year. Even in terms of World War II prestige films, The Imitation Game was always more beloved than Unbroken.

Sources tell us that Angelina Jolie is devastated by the film’s snub at the Oscars, even though her husband’s producing effort – Selma – netted a Best Picture nomination. It’s unfortunate that absolutely zero Best Director nominees this year were women – even though Angelina Jolie and Selma’s Ava DuVernay were considered strong candidates – but that’s the state of Hollywood. Plus, Unbroken just wasn’t good enough to merit awards season consideration, in the eyes of Oscar voters. The only reason it got as far as it did and the amount of buzz that it did was due to Angelina Jolie’s involvement. Remove her, and you have yet another awards-bait film based on an international bestseller. Unfortunately, those are a dime a dozen, and you need a little more than that to stand out among the crowd.