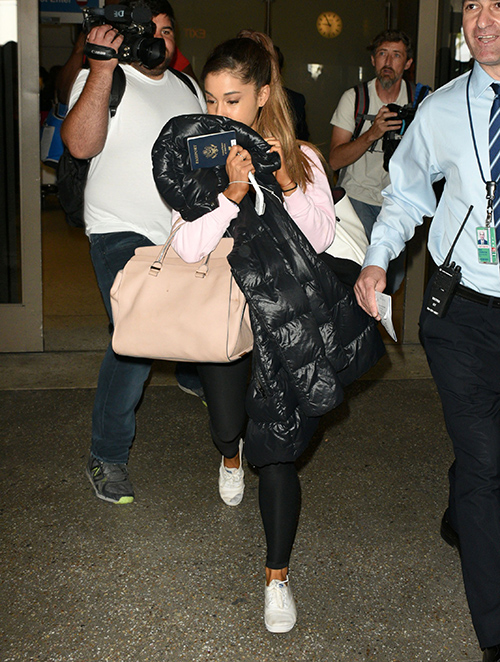 Ariana Grande has made it clear who is her favorite in the feud between Taylor Swift and Katy Perry. The “Problem” singer might have made exactly that, a problem, with her former friend Taylor Swift after she announced her allegiance to team Katy Perry.

Grande appeared as a guest on the “Zach Sang and the Gang” radio show recently when she confessed who she has been buddying up to recently. Ariana admitted that one of her closest friends is Katy Perry. Grande talked about how Perry had inspired her in her career and made it sound like they had been getting pretty chummy.

In the interview, Ariana Grande recounted a Katy Perry concert she went to that inspired her. Ariana said, “I went to her show at The Staples Center a couple years ago and I was totally inspired by it and was like ‘Wow, I wanna do this one day.’ And then just three years later, I had my own show there, and she came, and she held my hand in the prayer circle and she was like ‘girl, you were here a few years ago watching me and now I’m here watching you, you better kill it girl.’ So she’s always been really supportive.”

This might be a big surprise to Katy Perry’s frenemy Taylor Swift. Ariana Grande had been considered part of Swift’s squad, a growing group of women who hang tight with the “Shake It Off” singer. It’s looking like that isn’t the case anymore though because Ariana didn’t even bring up Taylor Swift in the interview.

Is it possible that Ariana Grande and Taylor Swift had a falling out? Just last year, Ariana was talking about having a sleepover with Swift where they talked about boys and clothes. Several pictures were shared backstage at the 2014 Victoria’s Secret Fashion Show where Taylor Swift and Ariana Grande bonded.

So what happened to make Ariana turn team Katy Perry now? We’re guessing it has something to do with Selena Gomez. It’s no secret that Selena and TSwift are BFFs. It’s also no secret that Ariana Grande and Justin Bieber are about to tour together for several shows and Selena Gomez is freaking out about it.