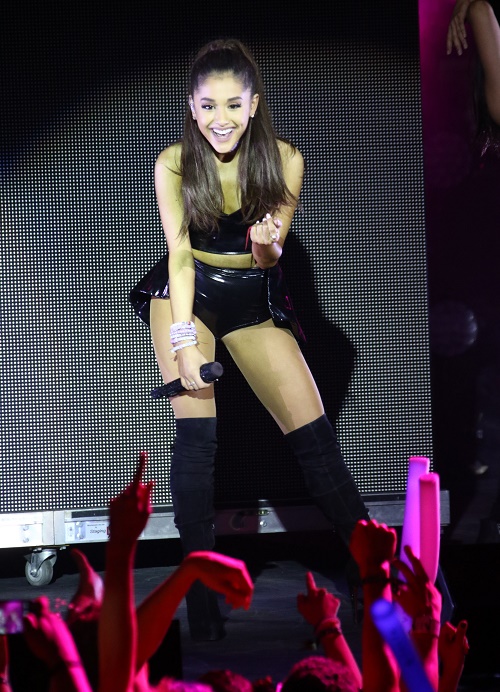 Ariana Grande has a new boyfriend, and his name is Ricky Alvarez! Ironically, just yesterday, we reported that Ariana Grande’s team was literally giving away tickets and practically begging people to come to her concerts. The pint-sized diva definitely needs some sort of scandal to revive her sinking career and get her name back in the news. Apparently, Ariana Grande took our advice to heart and she stepped out with her new boyfriend Ricky Alvarez to lick donuts (no, that’s not a typo). Who is Ricky Alvarez? Well, Ariana pulled a J-Lo and started dating her own backup dancer!

Ariana Grande and her new boyfriend Ricky went to Wolfee’s Donuts in Lake Elsinore, California on Saturday, July 4 and security cameras caught their PDA session on tape, which included daring each other to lick all of the donuts. Then they proceeded to lick each other, and have a hot and heavy make-out session right at that counter. TMZ posted a video of Ariana Grande and Ricky Alvarez’s love-fest, and it’s bizarre … to say the least.

We are really trying to wrap our minds around super diva Ariana Grande slumming it with a backup dancer. We don’t have anything personal against back-up dancers, but seriously since when would she even let a backup dancer look her in the eye or address her by name – let alone make out with her in public at a donut shop. Call us crazy, but this has publicity scam written all over it. It’s a bit too ironic that the same week Ariana’s concert tickets get slashed down to $16 because no one is buying them that she then steps out with a random backup dancer and makes out with him (and donuts) on video.

What do you guys think? Is Ariana really dating Ricky Alvarez? Or was the donut shop PDA session just a publicity stunt? Let us know what you think in the comments below!