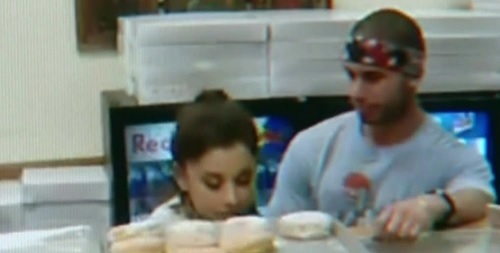 Will Ariana Grande be arrested for spitting on and licking unsuspecting customer’s donuts!? Over the 4th of July weekend, Ariana went to Wolfees Donuts with her new boyfriend Ricky Alvarez. The diva was caught on security videos ranting that she “hated America,” making fun of fat people, and then spitting on entire trays of donuts that were later bought by customers.

On Wednesday, July 8, Ariana Grande issued a “sorry not sorry” statement. She insists that she loves America; she just hates how fat America is. She didn’t apologize to the people that bought the donuts she spit on though. Take a look at the most unapologetic apology we have ever heard:

“I am EXTREMELY proud to be an American and I’ve always made it clear that I love my country.” She added that what she said was “taken out of context and I am sorry for not using more discretion with my choice of words.” Grande went on to say, “The fact that the United States has the highest child obesity rate in the world frustrates me. We need to do more to educate ourselves and our children about the dangers of overeating and the poison we put in our bodies,” she continued. “We need to demand more from our food industry.”

Apparently, the local police department and Riverside Public Health Department were unimpressed with Ariana’s apology, and they have contacted Wolfees Donuts and demanded to see the security videos. How embarrassing would it be if Ariana Grande winds up getting arrested or charged with something for spitting on donuts? Then again, maybe the local police department are the poor chumps who bought the spit on donuts – I would be mad too.

What do you think of Ariana’s anti-America and fat-shaming rant? Should she be arrested or charged for something after spitting on donuts? Let us know what you think in the comments below!