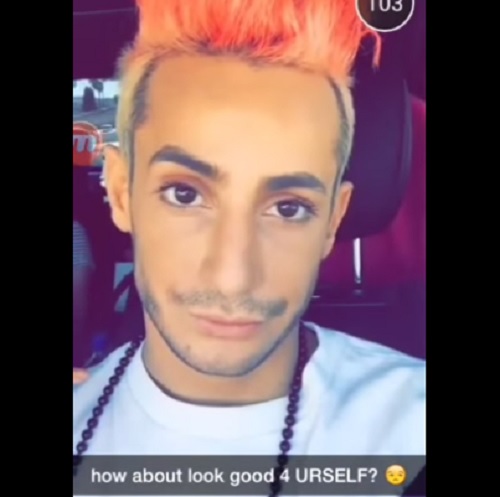 Ariana Grande has always been labeled a diva, but she took her rotten behavior to a whole level this weekend when she was caught on video making fun of fat people, ranting that she hated America (On Independence Day no less), and then licking donuts that unknowing customers later bought and ate. And, I don’t care if you are Ariana Grande or a homeless guy named Joe, if I found out you licked my food before I purchased it, heads will roll! The rest of the internet seems to feel the same way about licked donuts.

Anyways, the apple doesn’t fall far from the Grande Tree. While Ariana was slamming donut-eaters and well the entire country, her brother Frankie Grande (who you most likely recognize from Big Brother 16) took to SnapChat to slam Selena Gomez. He posted a video of himself listening to Selena’s hit single “Good For You,” while he rolled his eyes and made disgusted facial expressions. Frankie captioned the video, “How about look good for URSELF.”

Seriously, Frankie and Ariana need to just stop while they are ahead and lay low for a bit, because this is just not their week. We’re not trying to take sides or anything, but yeah Selena didn’t lick our donuts, so Team Selena all the way. Frankie’s Selena diss screams JEALOUSY. Her song is killing the Billboard charts right now – and Ariana Grande can’t even sell out a concert. Tickets to her summer tour were recently slashed to a mere $16 just to try and fill seats so it didn’t look like nobody showed up to hear Ariana sing.

Do you agree with Frankie? Or is he just jealous that his sister’s concerts are bombing? Are you Team Selena or Team Ariana? Let us know what you think in the comments below!