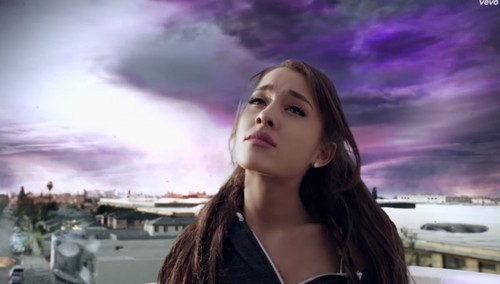 Ariana Grande has proven herself to be a diva of the highest proportion, and thus, it’s not that surprising to hear that she has been accused of stealing concept art for her music video from another musician. Ariana released her fourth album last week titled ‘Everything’, and one of the less hyped songs on the track is called ‘One Last Time’. It didn’t really get much attention until this week, when an Australian music group named SAFIA came forward and accused Ariana of stealing their concept for her music video. The music video for ‘One Last Time’ shows Ariana running through a series of post-apocalyptic scenes on Earth’s last day. Except, guess what? That’s right, SAFIA’s 2014 music video for ‘You Are The One’ contains a very similar video, down to the post-apocalyptic scenes and exploding background.

SAFIA issued a statement on Facebook (via Celebitchy) comparing the two videos, and they were not kind in their comparisons. They wrote, “This might just be coincidence but to us it looks like either the people at Ariana Grande’s label or the film maker have seen our clip for ‘You Are The One’ & reworked the concept a little bit and then straight up stolen and copied some bits…(ESPECIALLY THE END!) Wouldn’t be the first time uncreative talentless f*cks from big labels and/or big film firms steal ideas from small independent creatives who are trying really hard to make something different for a change…”

They then proceeded to post two side-by-side screenshots from both music videos, and we have to admit, they look VERY similar. Specifically, the kiss at the end of the video with the pink sky looks literally as though it was copied frame by frame from SAFIA’s music video.

Of course, the director of Ariana’s music video, Max Landis, quickly got involved to defend his directorial choices. He claims that it was a ‘trope’ that they used, with the whole post-apocalyptic wasteland and the accompanying color schemes. To be fair to him, the post-apocalyptic scenario is one that’s highly used in music videos, but at the same time, it’s Ariana Grande. We already know she demands creative control on this sort of thing, and she might have watched SAFIA’s video and wanted something similar, not realizing that people would notice the similarities.

What do you guys think? Is Ariana Grande behind the plagiarism, or was it Max Landis? Or is SAFIA overreacting, and it is a commonly used music video trope? Let us know your thoughts in the comments below.