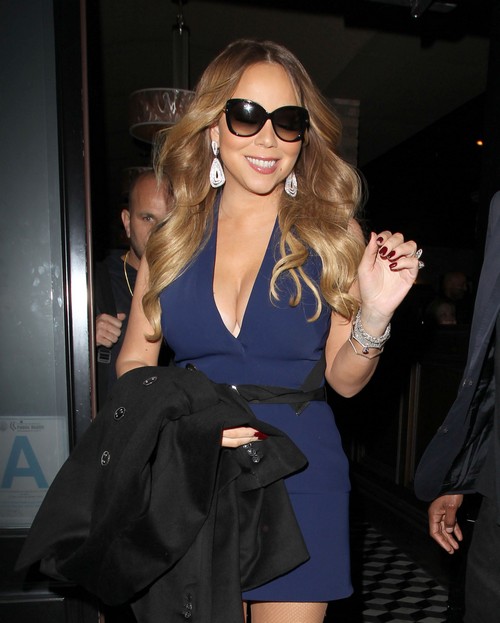 Ariana Grande and Mariah Carey have a lot in common; they both have reputations for being extremely difficult, their middle names might as well be ‘diva’, and even their musical sounds are similar. However, new reports suggest that Ariana Grande is getting sick of the comparisons to Mariah Carey, and she wants them to stop. Girl, PLEASE.

Sources have told Naughty Gossip that Ariana is ordering her team to ‘kill’ the stories comparing her to Mariah Carey, adding, “She hates being compared to someone, and she’s trying to do everything possible to make sure people forget about the others.”

Does this girl really think that she’s better than Mariah Carey? Mariah Carey is considered the queen of pop music, and she’s so talented that her difficult behavior has often been put aside in favor of letting her realize her talent. While Ariana Grande is also very talented – and has the sales to back it – she’s still very new to the music industry, and any more stories of diva behavior will start getting her blacklisted at events and performances.

She’s already obtained a horrible reputation among event organizers, and even her own team is apparently loathe to work with her. And yet, she wants the comparisons to Mariah Carey to stop? I guess she realizes that the majority of the comparisons are centered on the diva behavior, not the talent. But she wishes she could reach Mariah’s position! At this rate, Ariana is bound to alienate everyone she works with, including big-time producers and executives. And she’s not popular enough to sustain a career while also fostering a diva reputation, even though Mariah has managed to do just that. If anything, she should be encouraging the comparisons, not shutting them down.

What do you guys think? Is Ariana Grande getting frustrated with the Mariah Carey comparisons? Let us know your thoughts in the comments below.

Mariah Carey enjoys dinner at trendy Craig’s Restaurant on January 14, 2015 in West Hollywood, California. Mariah has signed a residency deal to headline the Colosseum at Caesars Palace in Las Vegas while Celine Dion takes an indefinite break. Mariah’s deal is likely to be more than the $30 million that Britney Spears is making at Planet Hollywood. FameFlynet