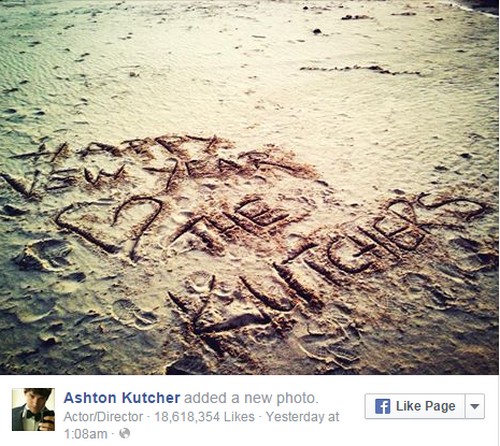 Ashton Kutcher and Mila Kunis just had their first child together, and they’re engaged, so it’s just a matter of time before they get married, right? Well, Ashton Kutcher shared a very cryptic message on his Facebook on January 1st suggesting that they might have gotten married already. He uploaded photo showing a message in the sand reading, “Happy New Year. Love, the Kutchers.”

Have Ashton Kutcher and Mila Kunis managed to get married in secret? Rumors of an impromptu marriage with the ‘Kutchers’ kicked into high gear when the couple was spotted at a Lakers game on December 19th, and Mila wore a ring that looked suspiciously like a wedding ring. Of course, Mila and Ashton are so ‘private’, and thus, they will pretend as though they don’t want the media sniffing around their personal lives. But then, Ashton goes and shares a Facebook message that comes across as unofficial confirmation that they’ve gone and eloped. Why else would he say Happy New Year from the ‘Kutchers’ unless he was just being sexist and presumptuous?

Ashton Kutcher and Mila Kunis got engaged in February 2014, and Mila gave birth to their daughter, Wyatt, in September. In Hollyweird, being engaged for a year is very normal, so Ashton uploading that Facebook photo is no guarantee that they’re even going to get married. However, that photo certainly does ring alarm bells, especially since eloping sounds right up Ashton’s and Mila’s alley.

What do you guys think? Have Ashton Kutcher and Mila Kunis gotten married in secret? Would Ashton Kutcher ever get married to Mila Kunis without telling the whole world about it? Knowing him, this is the most restrained he’s ever been regarding major life news, and I simply cannot imagine these two getting married without revealing it soon after in an official capacity. Do you agree or disagree? Let us know your thoughts in the comments below.