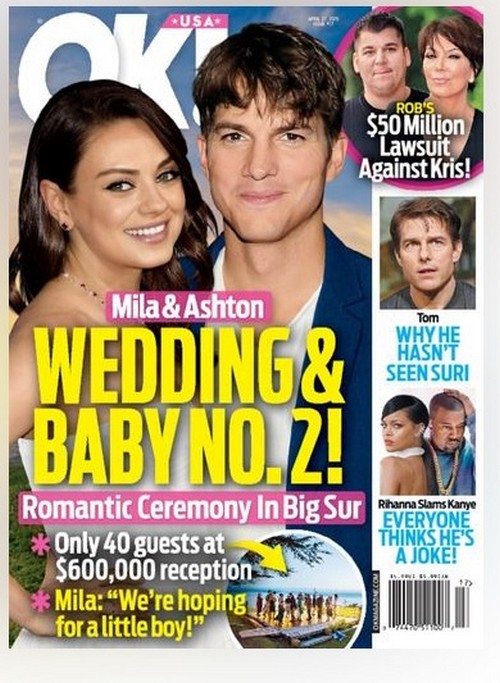 Ashton Kutcher and Mila Kunis are finally getting married – and having another baby, according to the April 27 edition of OK! Magazine. The cover of this week’s OK! Magazine features a photo of the happy couple accompanied with the headline, “Mila & Ashton Wedding And Baby No. 2!” The cover goes on to say, “Romantic ceremony in Big Sur, only 40 guests invited to $600,000 reception,” and then reveals that this time around Mila desperately wants to have a baby boy and to give Wyatt a little brother.

Ashton and Mila have been rumored to be getting married for months – at one point after their daughter was born it was believed that the couple had actually managed to have a secret wedding and tie the knot without the media even realizing it. In two separate interviews on Ellen and The Late Late Show, Mila Kunis hinted that she and Ashton had already eloped. But, according to OK! Magazine’s insiders, Mila and Ashton have been teasing that they eloped to divert attention while they actually plan their wedding – which will be in Big Sure.

OK! Magazine’s inside source explains, “They’re having fun convincing everyone that they are already married, it takes the pressure off the planning that’s already underway. At first they thought they would get married and then have another kid. But, then Ashton asked Mila, ‘what exactly are we waiting for?’ They’re happier than ever and Mila isn’t opposed to being a pregnant bride.” Although Ashton and Mila’s wedding ceremony will be small and won’t have more than 40 attendees – the tabloids insiders claim that Ashton has already invited Rumer Willis to the shindig. I think we can all agree that Demi Moore is not going to be a happy camper when she realizes that her invite was lost in the mail.

So, did Ashton and Mila have you fooled, did you think they were already married? Will Mila be a pregnant bride? How much longer until Mila Kunis is spotted with another baby bump? Let us know what you think in the comments below!