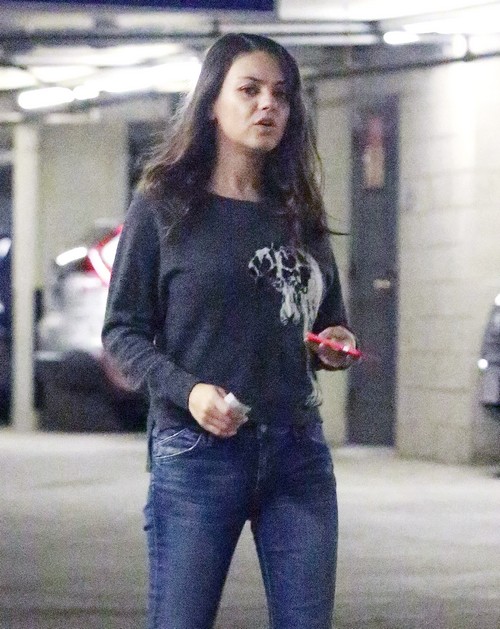 Proving he has hosting skills, Corden pressed the subject again stating, “Either you’re married or you’re not.” Unrelenting, Mila gave her “maybe” answer again. The British host matched her attempt at being coy by asking her to show the audience her left ring finger. A ring strongly resembling a wedding band prompted Corden to point out the evidence, “They are married, look!”

After Mila Kunis revealed she and Kutcher were married, Corden asked the 31-year-old star if confirming her marriage was ok with her according to the Mirror. She “knew her secret was out” and laughed as she assured the host “It’s fine.” This revelation will be shared during the premiere of ‘The Late Late Show with James Corden’ on Monday March 23.

Mila Kunis has been coy about her relationship with Ashton Kutcher since the start of their romance. After Ashton Kutcher’s marriage to Demi Moore ended in divorce following a string of rumors he was cheating on her with every hot tub ho he could get his hands on, Mila and Ashton started hooking up. Initially, a rep for Kunis denied the former ‘That 70’s Show’ co-stars were dating, and slapped a “just friends” label on them.

Fast forward to 2014, and Mila Kunis and Ashton Kutcher were engaged. She wore the engagement ring for nearly two months before confirming their plans to wed in February. Meanwhile, Kunis was pregnant and didn’t make the confirmation until she was rocking a rather undeniable baby bump. The couple then welcomed their daughter, Wyatt Isabelle Kutcher in October 2014.

Following Kunis’ wearing what looked like a wedding band on her left hand to a Lakers game in mid-December, Ashton shared a “cryptic message” via Facebook. The ‘Two and a Half Men’ star posted a photo of the words “Happy New Year! Love, the Kutchers” written in sand. This ignited rumors that Mila Kunis and Ashton Kutcher are married. Again, no confirmation or admission of a secret wedding followed. Mila didn’t confirm or deny their marriage after Ellen DeGeneres asked about the photo during her talk show. Kunis simply retorted, “I don’t know. We could just be a plural. My daughter has his last name legally.”

Notice that Mila wears a wedding band, but Ashton Kutcher hasn’t been spotted wearing a ring? Now that their secret marriage is no longer a secret, will Kutcher’s wedding ring make an appearance? Maybe he isn’t a fan of jewelry, or maybe he hasn’t completely abandoned his cheating ways. Let’s hope for Mila’s sake he keeps his wandering crotch to himself from now on.