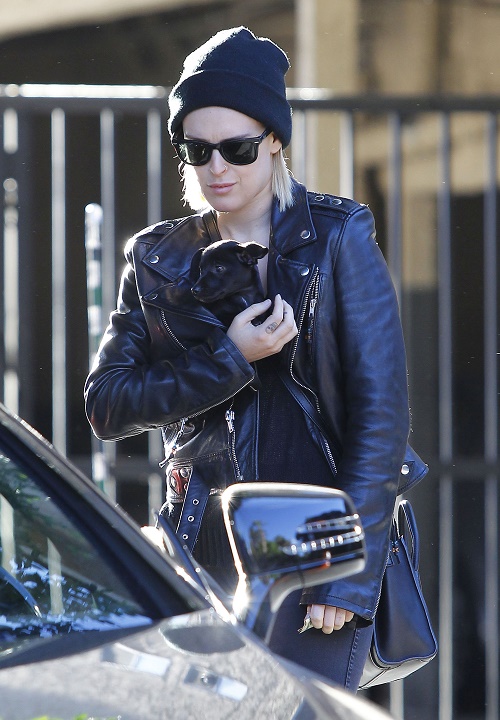 Demi Moore is reportedly mad at Rumer Willis for visiting Ashton Kutcher and Mila Kunis’ daughter, Wyatt! Demi Moore is not your average mother – one can only imagine what it must be like being raised by a woman who steals her teen daughter’s boyfriends. So, we’re not exactly shocked by the latest report of Demi’s questionable parenting in the February 25th edition of OK! Magazine. The tabloid is reporting that Demi is in a major feud with her daughter Rumer Willis, and you are literally going to laugh until you cry when you hear why.

Demi Moore’s obsession with her ex boy-toy Ashton Kutcher and Mila Kunis is borderline psychotic, the stuff of fatal attraction thrillers. When Mila Kunis gave birth to her and Ashton’s daughter Wyatt stories flooded the internet about Demi Moore showering the newborn with gifts and practically stalking Ashton and Mila in a desperate attempt to meet the baby. Why on earth any woman would want to meet her ex-boyfriends baby with another woman still baffles us, and proves just how unstable and obsessive Demi Moore really is.

According to the February 25th edition of OK! Magazine, despite Demi’s desperate attempts to meet Ashton and Mila’s new addition and being shot down every time, her daughter Rumer was invited to their house to meet the baby – and Demi is furious. According to OK! Magazine’s inside sources, “Rumer and Ashton were always really close and she is genuinely happy that his dreams of fatherhood have come true. So, it’s no surprise that Rumer decided to keep the meeting a secret for fear of upsetting her mom. Rumer knows Demi still hasn’t gotten over what happened with her marriage to Ashton, which is why she is so insistent on being part of Wyatt’s life.”

Well, if Demi didn’t know about Rumer’s covert trip to Ashton and Mila’s house to meet baby Wyatt, then she certainly does now – thanks to the tabloid. And, considering what we know about Demi Moore, we can only imagine the psychotic voicemails she is leaving on her daughter’s cell-phone as we speak. At this stage in the game, Ashton and Mila may want to consider a restraining order. Can you believe that Demi is still hung up on Ashton and his new family? Is she really going to give Rumer a hard time for meeting with Ashton and baby Wyatt? Let us know what you think in the comments below!